Suing the Police: When Citizens' Rights are Violated - An Interview with Nicolas Wright

Suing the Police: When Citizens' Rights are Violated
by grtv
With a billion dollar price tag, the 2010 Toronto G20 was one of the most expensive security operations in history. As part of that operation, police services and government officials conspired to lie to the public about supposed powers to violate citizens' guaranteed rights under the Canadian Charter of Rights and Freedoms.

As a result, thousands of people were subjected to illegal searches, seizures and arrests.

Now Nicholas Wright, a Toronto lawyer and the President of Geopoliticalmonitor.com, is suing the police for his unlawful arrest.

Find out more about Wright's experience suing the police in this week's GRTV Feature Interview. 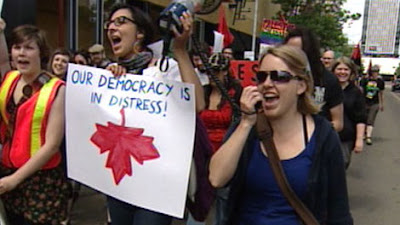 Posted by Stranger in a Strange Land at 9:08 AM