R2P: Imperial Conquest by Another Name - An Interview with Investigate Reporter Pepe Escobar

R2P: Imperial Conquest by Another Name
by grtv - March 26, 2012
As the world recovers from one humanitarian peace bombing in Libya, and braces for another possible intervention in Syria, many are now asking how it is that the so-called liberal left have become cheerleaders for the very wars of aggression they once pretended to deride. As long-time investigate reporter Pepe Escobar explains, an obscure international doctrine called Responsibility To Protect or R2P has been the main tool for shaping this new paradigm for the continuation of NATO's imperial power grabs around the world.

Find out more about the history of this doctrine in this week's GRTV Feature Interview with our special guest Pepe Escobar.

Below are several articles explaining the Responsibility To Protect Doctrine:

SYRIA: The Orwellian "Responsibility to Protect" (R2P) used to Justify "Regime Change" and All Out War
by Mahdi Darius Nazemroaya

Responsibility to Protect (R2P): Where America Chooses to Back "Armed Struggle"
by Nicola Nasser

The Responsibility to Protect, the International Criminal Court, and Foreign Policy in Focus
by Edward S. Herman and David Peterson 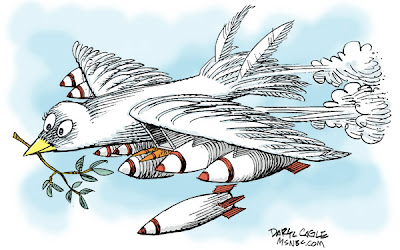 Posted by Stranger in a Strange Land at 10:23 AM