Education And The Debt Crisis: Austerity in the Mind Factory by Alan Sears 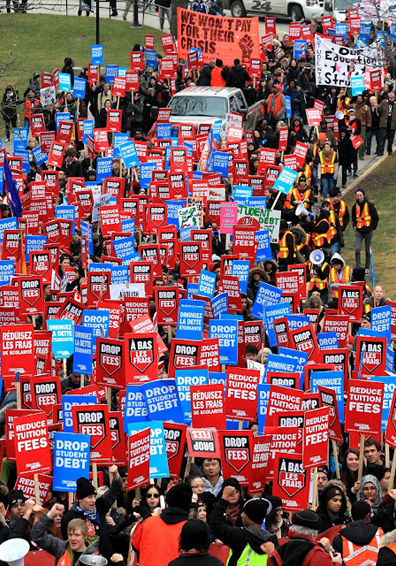 Education And The Debt Crisis:  Austerity in the Mind Factory

Educational struggles are breaking out all over. In March 2012, over 200,000 Quebec students are waging a general strike against tuition increases and have faced brutal police repression. British Columbia teachers just finished a three-day strike against an austerity budget and are set to engage in further strike action. Teacher collective bargaining seems to be headed toward an impasse in Ontario. Faculty members at Dalhousie University in Halifax were on the verge of a strike to resist concessions demanded by their university administration, though a last-minute agreement kept them from the picket lines.

Over the past few years we have seen the brilliant mobilization of the Chilean student movement against their thoroughly neoliberal education system, which dates back to the authoritarian Pinochet regime that overthrew the democratic left-wing government of Salvador Allende. British students occupied numerous universities and organized huge marches and militant protest actions to resist the tripling of their tuition fees. Students in California mobilized against austerity cuts and tuition increases, and that activism has continued with a wave of Occupy actions and other organizing. That is just to mention a few.

Education and the Austerity Agenda

It is not an accident that education is looming so large in anti-austerity struggles. Education is a costly item at a time governments are looking to slash expenditures, and full-time teachers or profs are an ideal target in campaigns to vilify and attack unionized public sector workers with decent job security, benefits and pensions. But that's only part of the reason. Education is about the formation of the population, and changes in workplace organization, labour market practices and models of democratic conduct require a reorganization of the schools, colleges and universities. Education systems are designed to develop particular kinds of worker-citizens, and current government policy documents, supported by statements from employers' organizations, argue that the mind factory is still turning out last year's model.

For example, the “three-cubed” position paper prepared for the Ontario government and recently leaked to the press argues that today's students need to be prepared for work in the “new creative economy.” The paper argues that there is a need to: “redefine the role of higher education to serve the foundational needs of the new creative economy.” Students need to be prepared to be more entrepreneurial in this context:  “we will create more than just one of the best educated workforces in the world, we will also be in a position to create the entrepreneurial talent – the job creators of tomorrow – that Ontario's economy will benefit from for decades to come.”

There are lots of debates about whether this really is a “creative economy” given that most workers simply face new kinds of drudge work, only now it often involves a computer screen. There is, however, no doubt that significant changes are underway in the workplace and state policy, changes that have real impact. One important example is the deliberate shift from security to precariousness as a way to motivate worker productivity. At the height of the welfare state, management strategies sought to motivate some sections of the working-class to work hard through expectations of security – sustained employment, benefits to protect against adverse circumstances, pensions for a decent retirement, etc. Now, they are opting for precariousness as a strategy, so that no one feels their job is safe or that they can rely on benefits or services to help them out in times of need. Of course, many workers – and particularly women workers of colour – never won security and have always faced precariousness.

The education system helps to frame the expectations of future generations around security and precariousness, as well as many other issues. Sharp increases in tuition fees, for example, send a clear message to students that education is not a right, and that they are entitled to nothing they cannot afford to buy. This is not only about what is taught, but also the way the education system is structured, which in itself sends a strong message to students.

Governments are using the age of austerity to radically restructure education systems around the world. The basic blueprints for education “reform” that were laid out during the neoliberal period beginning in the 1970s are being implemented at double speed in the age of austerity. But governments are emboldened by the deep austerity programs already in place in countries like Greece, Ireland and Portugal. And while they have faced some impressive resistance, so far it has not mobilized to a level that threatens the government agenda. Employers and state policy-makers are pushing much further than they might have dreamed even a few years ago.

The Ontario government's “three-cubed” document on post-secondary education does not lack for audacity. Even though it is a background paper that might not be implemented in precisely this form, it marks a rapid policy shift for the Liberal government of Dalton McGuinty, who has wanted to be known as the “education premier.”

To read the rest of this article, please click on the link below:

Posted by Stranger in a Strange Land at 3:12 PM