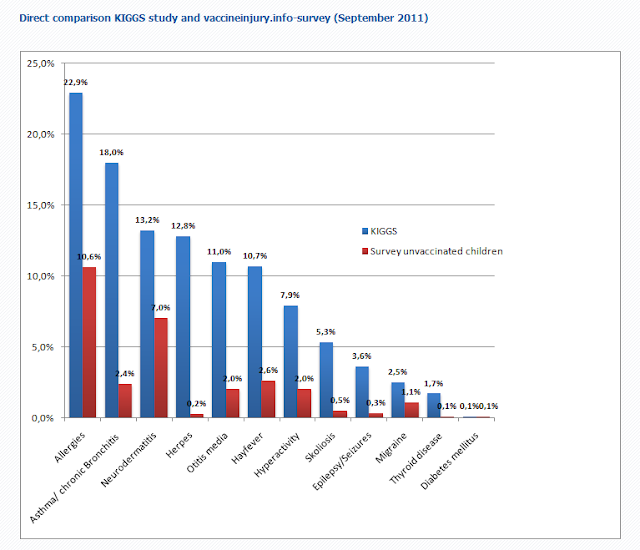 The results are presented in the bar chart below; the complete data and study results are here. The data is compared to the national German KIGGS health study of the children in the general population. Most of the respondents to the survey were from the U.S. (Click on the chart to see it better)

The data was collected from parents with vaccine-free children via an internet questionnaire by vaccineinjury.info and Andreas Bachmair, a German classical homeopathic practitioner. The independent study is self-funded and is not sponsored by a large “credible” non-profit or government health organization with political and financial conflicts of interest; hence Bachmair relies on Google ads and donations for revenue. Each one of the 8000 cases are actual cases with medical documentation. Three other studies had similar results according to Bachmair and are reported below.


No study of health outcomes of vaccinated people versus unvaccinated has ever been conducted in the U.S. by CDC or any other agency in the 50 years or more of an accelerating schedule of vaccinations (now over 50 doses of 14 vaccines given before kindergarten, 26 doses in the first year). Most data collected by CDC is contained in the Vaccine Adverse Event Reporting System (VAERS) database. The VAERS is generally thought to contain only 3 to 5 percent of reportable incidents. This is simply because only some immediate reactions are reported by doctors; but many are not admitted to be reactions to the vaccine. Most importantly, the VAERS numbers are only immediate reactions, which I would place with a few hours to a few weeks. Long-term vaccine-induced diseases and disorders are not recognized by parents or doctors when these conditions develop perhaps a few months to five years or more and would never be realized to come from multiple vaccinations. In other words, many children and adults have diseases and disorders that are vaccine induced and they never suspect they are from the vaccines, as this study indicates.

The only other bias in this study may include the fact that parents of unvaccinated children are obviously concerned about the health risks of vaccines, and are more likely to make other healthier choices such as feeding their children a much better diet and using more natural remedies and using fewer pharmaceuticals.

Now half the U.S. children suffer from chronic diseases and disorders and 21% are developmentally disabled. Yet the public health system always uses the sacred mantra “vaccine-preventable diseases” when referring to their top public health achievement of mass vaccinations. I think we should be talking more in terms of preventable vaccine-induced diseases.


The survey is still ongoing and you may take the survey here if you have unvaccinated children.

Other studies were cited by Andreas Bachmair

Results: of 1004 unvaccinated children, had:

Longterm Study in Guinea-Bissau (1 Kristensen I, Aaby P, Jensen H.:“Routine vaccinations and child survival: follow up study in Guinea-Bissau, West Africa”, BMJ 2000; 321: 1435–41)
The children of 15,000 mothers were observed from 1990 to 1996 for 5 years.
Result: the death rate in vaccinated children against diphtheria, tetanus and whooping cough is twice as high as the unvaccinated children (10.5% versus 4.7%).

The study involved 254 children. In which 133 children were vaccinated and 121 remained unvaccinated.

Source of the above article:

Health Freedom Alliance
Posted by Stranger in a Strange Land at 2:38 PM

A very nice informational blog. Keep on making such important blog post.It’s difficult to find high-quality writing like yours nowadays.
Alopecia of Beard

http://pubmed.gov/21412506 says
"We evaluated data on diseases that are preventable by vaccination, infectious and atopic diseases, and vaccinations received that had been collected between 2003 and 2006 in a representative sample of 17 641 subjects aged 0 to 17 years in the framework of the German Health Interview and Examination Survey for Children and Adolescents (Kinder- und Jugendgesundheitssurvey, KiGGS).
...
The prevalence of allergic diseases and non-specific infections in children and adolescents was not found to depend on vaccination status."

In other words, the KiGGS data says the exact opposite of what your post says.

It looks like the vaccineinjury.info article compared the results from the population-wide KiGGS survey with a special survey targeted vaccine opponents. Vaccine opponents may perceive health issues differently from the general public, so it's probably not fair to compare data from the two surveys.

But the KiGGS survey did include info on vaccination that lets you measure whether vaccinated kids have higher or lower incidence of allergies. http://pubmed.gov/21412506 had a look at that data. It says
"We evaluated data on diseases that are preventable by vaccination, infectious and atopic diseases, and vaccinations received that had been collected between 2003 and 2006 in a representative sample of 17 641 subjects aged 0 to 17 years in the framework of the German Health Interview and Examination Survey for Children and Adolescents (Kinder- und Jugendgesundheitssurvey, KiGGS).
...
The prevalence of allergic diseases and non-specific infections in children and adolescents was not found to depend on vaccination status."

So take the post from vaccineinjury.info with a grain of salt... they seem to be comparing apples to oranges.

Such a good article. These tips are so helpful to KIDS. I found one more site related to kids articles. Please learn more about your KIDS here kidsvedas.com

Every kid is unique and every kids has own ability to learn… some are very brilliant and some has slow learner, for those kids kurt penberg find a solution as sing your name. that product engage kids in musical study..

Dan is a professional Shill. Checked him out. He represents several Mega Corps.

You've been at this for a while. Finding literature on outcomes is tough. Even Facebook groups submit few articles on that - though I've had a number of links refused for 'violating community standards' even within the group of late. More on censorship and vaccine related topics at oldephartte.livejournal.com The tag file is the quick way to find related posts. View only works for a month at a time if you select that - even with titles.

People are waking up. It takes time Opit