All the bail out money is going to the lenders and not to the people.

The Greek Parliament is set to approve the country's new international bailout deal later today as more protests, against austerity measures in return for rescue funds, are planned. Athens received a second bailout this year. Combined with its first rescue package, the country stands to receive over 172 billion euros in loans from eurozone countries and the IMF. But Greece's creditors claim the country's most recent austerity measures could be 'accident prone'. Experts say the country may fail to lower its debt burden to the specified targets, later requiring more rescue loans. Greece is in its fifth year of recession, and many believe it needs to recover before debt reduction plans can have much effect. For more on this, we're joined by Attorney and Professor of Constitutional law, George Katroungalos, live from Athens. 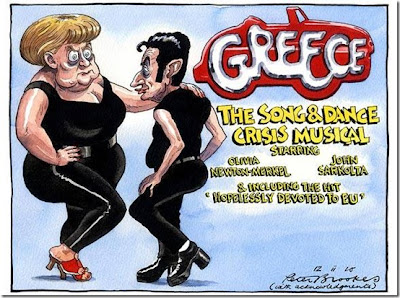 Posted by Stranger in a Strange Land at 2:33 PM