UNITY MARCH FOR JUSTICE AND RECONCILIATION AT THE NATO SUMMIT in Chicago, May 20, 2012 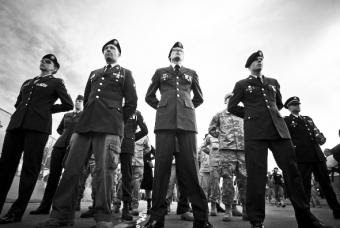 UNITY MARCH FOR JUSTICE AND RECONCILIATION AT THE NATO SUMMIT

Sunday May 20th supported by thousands, Afghanistan and Iraq veterans will march to NATO Summit to ceremoniously return their military service medals.

We, Afghanistan and Iraq veterans, from around the country have united withCANG8 Coalition aginst NATO/G8 war and poverty agenda  to converge in Chicago on May 20th for a unity march to the NATO summit and ceremoniously return our service medals to NATO generals. We were awarded these medals for serving in the Global War on Terror, a war based on lies and failed polices. This endless war has killed hundreds of thousands, stripped the humanity of all involved, and drained our communities of trillions of dollars, diverting funds from schools, clinics, libraries, and other public goods.

Iraq Veterans Against the War calls on fellow service members, veterans, Chicagoans, and everyone who believes in justice, dignity, and respect for all peoples to join us in the streets on May 20th. On this day, we will hold a nonviolent march to the site of the NATO summit where we will ceremoniously return our military service medals. We will demand that NATO immediately end the occupation of Afghanistan and relating economic and social injustices, bring U.S. war dollars home to fund our communities, and acknowledge the rights and humanity of all who are affected by these wars. We wish to begin a process of justice and reconciliation with the people of Afghanistan and other affected nations, fellow service members, veterans, and the American people.

The city of Chicago will host the NATO summit from May 20th-21st. NATO, the North Atlantic Treaty Organization, is an organization of western military superpowers whose combined military might is the world's largest and most powerful military force. The NATO mission in Afghanistan has dragged on for over a decade, to the detriment of the people of Afghanistan, military service members and their families, and our communities.

The recent news that the G8 summit, originally set to take place in Chicago this May, has been moved to Camp David shows that the world's large economies fear the mass mobilization and collective organizing of the people of Chicago. NATO should also be advised that the world's military superpowers, responsible for unjust wars, occupations, and militarism, are also not welcome in our hometown. We are emboldened by the knowledge that Chicagoans' call for popular mobilizations was enough to move the G8 out of our city. We must now harness this same people power to send the message loud and clear to NATO that they too will be met with resistance. Furthermore, even though the G8 and NATO will now be held apart from each other, we know that these two summits, and the interests they represent, are linked. War, austerity, poverty, and economic exploitation by the 1% go hand in hand.

It is time for us to take a stand and make our voices heard. We stand in international solidarity with the people of Afghanistan and all the people of the world who are demanding their right to self-determination, their human rights, and economic justice.

To cosponsor the march or for more information contact chicago@ivaw.org I 217-898-9083

Posted by Stranger in a Strange Land at 3:43 PM