Institutional Corruption Is Killing the Economy by Washington's Blog 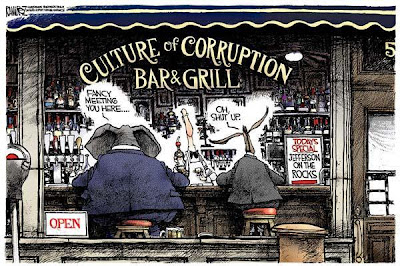 Institutional Corruption Is Killing the Economy
by Washington's Blog
Global Research Canada,  5 May 2012
People Are Losing Trust In All Institutions

The signs are everywhere: Americans have lost trust in our institutions.


"Our whole economy has been affected by variations in confidence. Central banks are sort of trusted, but the actions they have often affect people’s confidence by appearance rather than substance. We’re not in the most trusting mood now."

Seven in 10 Americans believe that the country is on the wrong track; eight in 10 are dissatisfied with the way the nation is being governed. Only 23 percent have confidence in banks, and just 19 percent have confidence in big business. Less than half the population expresses “a great deal” of confidence in the public-school system or organized religion. “We have lost our gods,” says Laura Hansen, an assistant professor of sociology at Western New England University in Springfield, Mass. “We lost [faith] in the media: Remember Walter Cronkite? We lost it in our culture: You can’t point to a movie star who might inspire us, because we know too much about them. We lost it in politics, because we know too much about politicians’ lives. We’ve lost it—that basic sense of trust and confidence—in everything.”

After a 50-year decline, just 14 percent of respondents in a 2011 Gallup Poll said that the federal government could be trusted “a great deal.

Gallup reported last month that – for the second year in a row – Americans said that gold is the safest long-term investment.   This  shows that Americans don’t trust the government.  Specifically, as Time Magazine points out:


Traditionally, gold has been a store of value when citizens do not trust their government politically or economically.

Indeed:
It’s not just the U.S.

As the Economist reported in January, trust in institutions is plunging worldwide:


The latest annual “trust barometer” published by Edelman, a PR firm, on January 24th [finds that] overall trust has declined in the leaders of the four main categories of organization scrutinized—government, business, non-governmental organizations and the media. Of the 50 or so countries examined, 11, nearly twice as many as last year, are now judged “sceptical”, with less than 50% of those polled saying they trusted these institutions. Trust in Japanese institutions plunged to 34%, from 51% in 2011, not surprising given the handling by leaders of the Tsunami and its aftermath. But the collapse in trust was even more striking in Brazil, the country in which trust was greatest in 2011, at 80%, but now, following a series of corruption scandals, has slipped to 51% (admittedly, still above America and Britain, among others).

This headline slump in trust is due, above all, to the public losing faith in political leaders. In 2011, across all countries, Edelman found that 52% of those polled trusted government; this year, it was only 43%. Government is now trusted less even than the media …. Trust in business fell slightly, from 56% to 53%, as did trust in NGOs, which still remain the most trusted type of institution, at 58%, down from 61% in 2011. As in previous years, the barometer is based on a poll of what Edelman calls “informed people”, which typically means professional and well-educated, though this year for the first time the views of the informed were benchmarked against a poll of the public as a whole. For each institution, the broader public was even less trusting than the informed, with government trusted by 38%, business 47%, NGOs 50% and the media 46%.

Lack of Trust Is Killing the Economy

Or Visit the Washington blog for this and other interesting blog entries at:

Posted by Stranger in a Strange Land at 10:36 AM