A documentary film exploring the use of toxic pesticides in modern agriculture and the people most affected by this practice.


Imagine discovering a product that you've been using is causing serious damage to your health and the environment.  But instead of safely disposing of that toxic product, you decide to go next door and sell it to your neighbor.  Hard to imagine, right?
This scenario isn't entirely unimaginable.  In the United States, once a pesticide is pulled off the market because it is shown have dangerous effects on peoples' health and the environment, we allow corporations to continue manufacturing and exporting that pesticide to other countries--even just a few feet across our borders.

If successfully funded, Toxic Profits will be a feature-length film documenting the lives of those most affected by this policy--those living in the Global South who are applying these banned and unregistered pesticides and suffering serious health effects as a result.  Countries in Africa, Asia, and Latin America use 25% of the world's pesticides, yet account for 99% of deaths caused by these toxins. [1]  Some 25 million farmers and agricultural workers across the globe are poisoned by pesticides each year, and poorly educated and impoverished laborers are most at risk, often applying pesticides without any training or protective clothing. [2]

The film will also explore how this issue affects everyone, as national borders mean nothing to pesticides.  Millions of barrels of pesticides travel the global marketplace and re-circulate as residue on food and fiber, as well as contaminants in global air and water currents. [3]  Moreover, the U.S. Department of Agriculture indicates that in 2010, almost 50% of fresh fruits and 25% of fresh vegetables consumed in the U.S. were grown overseas, yet the Food and Drug Administration currently inspects less than 1% of imports. [4]  Although the use of certain pesticides within U.S. borders is banned, these toxins may be coming back to us, in what is called the "circle of poison".

Finally, Toxic Profits will document alternative, sustainable farming solutions to corporate-controlled, pesticide-intensive agriculture. Because the global pesticide market is increasing by billions of dollars every year, the film will highlight alternative farming methods that have proven more effective and even more profitable than the industry standard.

Nick Capezzera is a film maker living in New York City.  Prior to Toxic Profits, he produced a documentary short, "A Summer at Hopper's House" that was featured at the Somerville Open Cinema Festival.


Evan Mascagni is an attorney living in San Francisco, working for a non-profit organization and a public interest law firm.  He attended UDC David A. Clarke School of Law in Washington, DC, where he was Editor-in-Chief of the UDC Law Review: Activism Meets Scholarship.

Shannon Post is a chef-sociologist, currently working as a baker in San Francisco. Prior to becoming a certified Natural Chef at Bauman College, focusing on seasonal, local, and organic food, she earned her Master's in Sociology at American University in DC. 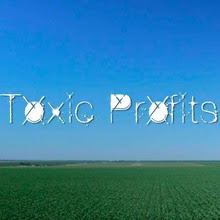 Posted by Stranger in a Strange Land at 3:11 PM