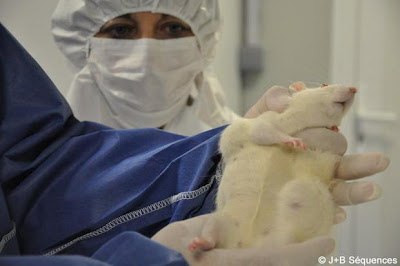 Following the recent rat study on NK603 GMO corn, Russia has suspended imports of Monsanto corn, while France continues investigations into the possible dangers of GMOs to human health.
On Tuesday this week, Russia suspended the import and use of Monsanto's genetically engineered corn, following the scientific study released on September 19 on rats fed with this corn, which caused serious health problems, including tumors and organ failure.
The study was run over a period of two years, which is the lifetime of the rats being studied and was the first animal feeding trial, set up to study the lifetime effects of exposure to NK603 Roundup tolerant GM maize, and also to Roundup, the world's best-selling herbicide and weedkiller.
According to the peer-reviewed study which was published in the journal Food and Chemical Toxicology and was presented at a news conference in London, the animals on the genetically modified (GM) diet suffered mammary tumors, as well as severe liver and kidney damage.
The Wall Street Journal reports that the consumer-rights watchdog in Russia, Rospotrebnadzor, has said that the country's Institute of Nutrition has been asked to assess the validity of the study.
Rospotrebnadzor has also contacted the European Commission’s Directorate General for Health & Consumers to ask for the EU’s position on the corn’s safety.
After the French study was complete, Monsanto said that it did not think this study would affect its license to export NK603 to Europe, but that they would wait to hear from the European Food Safety Authority (EFSA).
A spokesperson for the company said: "Based on our initial review, we do not believe the study presents information that would justify any change in EFSA’s views on the safety of genetically modified corn products or alter their approval status for genetically modified imports."
Also following the rat feeding study, the French government has called for an investigation into GMOs and has said that it would seek an immediate ban on EU imports, should the findings indicate a detrimental impact of human health. The French Agriculture Minister has asked European authorities to abandon the use of GMO crops.
The French government has asked its health and safety agency to assess the study and had also sent it on to the EFSA.
The French Health, Environment and Farm Ministries said in a joint statement, "Based on the conclusion ..., the government will ask the European authorities to take all necessary measures to protect human and animal health, measures that could go as far as an emergency suspension of imports of NK603 maize in the European Union."
As yet, the US Food and Drug Administration has not reacted to the study.
Gary Ruskin, Campaign Manager for Proposition 37, says, “Across the world, there are heightening concerns about the health risks of eating genetically engineered foods.”
“There is a giant question mark hanging over these foods and their health risks. For those of us in California, the case for labeling of genetically engineered foods has never been stronger.”
In November of this year, California voters will decide whether to require labeling of genetically engineered foods sold in the state – a requirement which is already in place in 50 other countries.
Monsanto has supported GMO labeling in Europe. One Monsanto advert which ran in the UK read: "Before you buy a potato, or any other food, you may want to know whether it's the product of food biotechnology. We have complete confidence that our food crops are as safe and nutritious as the standard alternatives."
"Recently you may have noticed a label appearing on some of the food in your supermarket. This is to inform you about the use of biotechnology in food. Monsanto fully supports UK food manufacturers and retailers in their introduction of these labels. We believe you should be aware of all the facts before making a purchase."
However, the company is spending millions to defeat the labeling of GMO products in California.
For more information about Proposition 37, visit:
www.carighttoknow.org
Source:

Posted by Stranger in a Strange Land at 8:56 AM

check this out said...