We should be encouraging the youth in our society to do exactly what Robyn is doing -- engaging in local politics, acting to protect the environment and questioning the world around her.

Blue Communities  are municipalities that adopt a water commons framework by: banning the sale of bottled water in public facilities and at municipal events, recognizing water as a human right, and promoting publicly financed, owned and operated water and waste-water services.

The success of the Blue Communities project in Ontario can be mainly attributed to Robyn Hamlyn who has met with 18 mayors and councillors. She talks about the environmental impacts of bottled water, the preposterous amount of profit bottled water companies make off communities' lakes and streams and the stricter standards with which tap water is regulated. People who hear Hamlyn speak are captivated by her charm, passion and foresight to think long term about our water sources. And the incredible part of this success story is that Hamlyn is only  13 years old .
Her success has not only caught the attention of mayors, city councillors, environmentalists and media but it has also caught the attention of industry and organizations that believe water should be sold for profit. Hamlyn's determination and effectiveness has provoked responses from Nestlé and Enviroment Probe, an organization that promotes the sale of water as a commodity.
John Challinor, Director of Corporate Affairs for Nestlé, has written letters to local newspapers saying there are other initiatives that the 13-year-old and others "can and should focus on to help preserve, protect and strengthen our water systems that are more effective than targeting bottled water." More recently, Essie Solomon, an intern for  Environment Probe , wrote an article in the  Financial Post , chiding municipalities for taking "their advice from a 13-year-old." It was shocking to read Environment Probe's attack on Hamlyn who has been volunteering her free time to meet with municipal councils across Ontario to talk about the impact of bottled water on current water sources, climate change and social justice.

We should be encouraging the youth in our society to do exactly what Robyn is doing -- engaging in local politics, acting to protect the environment and questioning the world around her. Solomon, whose article is condescendingly titled " Don't bottle 13-year-old's water wisdom ," would do well to pay attention to Hamlyn's work rather than toe the line of an organization that promotes the sale of water for profit.

It's also insulting to mayors and councillors to imply they do not examine critically the information presented to them. Not only is Hamlyn dispelling important myths about bottled water but she is also raising important issues that Canada is facing.

We believe municipal governments and other public bodies should not spend public funds providing bottled water at meetings or events, when a cheaper and more sustainable public alternative is readily available on tap. It simply doesn't make financial or environmental sense.

Municipalities are at a crossroads and face pressing infrastructure needs in the wake of budget cuts and conditional funding from the Harper government. The Harper government is targeting water and wastewater services for privatization. PPP Canada explicitly promotes privatization of public services by only allocating the $1.2 billion under the P3 Canada Fund to municipalities that let corporations deliver water and wastewater, transportation and communications services on a for-profit basis.

The Harper government has shut down public debate on many critical water issues and amended environmental legislation that will reverberate for generations to come.
Alter Net News 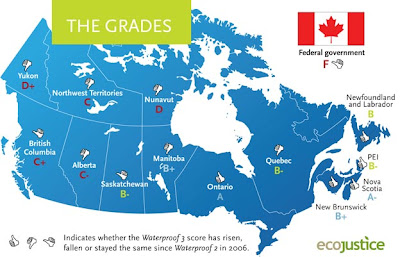 Posted by Stranger in a Strange Land at 1:58 PM

Found this very moving. Clearly a Star Child who has come back - as have others - to help us through this trying time.

FYI - I was able to organise our community up here in Whitehorse, Yukon to remove fluoride from our water a few years ago much to the anger of our local dentists who told me children would now have more cavities! It hasn't happened!

Fortunately, I live in a part of the world up here in the north where I can go out to the local creeks and get my drinking water. This I do. I encourage others to do the same but despite the chlorine in our tap water most accept that it is a small problem. Perhaps, compared to fluoride it is, but the water from the natural waterways such as my creeks gives water that contains natural elements that feed our bodies cells which tampered water, as with chlorine, does not.

Best wishes for a great week ahead for you,
Mike