OCCUPY: A Culture of Resistance was Born in 2011: the People United in an Independent Movement by Kevin Zeese and Margaret Flowers 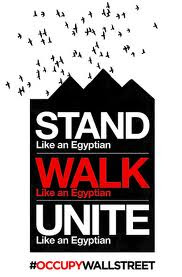 OCCUPY: A Culture of Resistance was Born in 2011: the People United in an Independent Movement
In 2012, the Real Conversation will be in the Occupations, while Corporate Candidates have a False Conversation
by Kevin Zeese and Margaret Flowers
Global Research Canada, January 10, 2012
The Occupy Movement that developed in 2011 profoundly shook the foundation of the 1%.  Almost instantly a new form of political power was created, all truly grown from the grass roots, and handed the 99% some REAL political capital for the first time in decades, and installed the Occupy Movement as a force to be reckoned with. Next spring promises to see more growth of this movement as the economy continues to stagnate and the government continues its dysfunction. Already, the Occupy Movement it showing its political independence: protesting candidates from both parties who are part of corrupt money-based elections.  The irrelevance of the political debate, primarily between two-corporate approved candidates, will become more evident as the voices of the people grow.
How We Got Here
No doubt every occupier has their own story, this is ours.  On December 16, 2010 we joined with Veterans for Peace and other organizations in an anti-war protest.  The theme of the protest was developing a ‘culture of resistance’ in the United States.  Many of us spoke that day about the need for resistance, perhaps none more clearly than noted author Chris Hedges who said “Hope will only come when we resist the violence of the state. . . . those who resist here today with non-violence are the last thin line of defense between a civil society and its disintegration.”  That day 132 Americans, mostly veterans, were arrested standing against the corporate-military state that the United States has become.
The next day, Mohamed Bouazizi, a Tunisian vegetable vendor in Sidi Bouzid, a poor town of 40,000 people located in the center of Tunisia, set himself on fire in front of the municipal building seeking redress for police abuse.  Bouazizi’s death highlighted an unfair economy that created a life of poverty and misery for many in Tunisia, similar to many around the world.  Police corruption and brutality that enforced the unfair economy sparked his suicide. His mother told TIME Magazine that his death “was about his dignity. Dignity before bread. Mohammad's first concern was his dignity.” His death ignited a rebellion that toppled the 23 year old autocratic rule of Zine Ben Ali in less than one month.
The Tunisian revolution sparked revolutions that became known as the Arab Spring.  Most notable was the still-ongoing Egyptian Revolution which began on January 25th receiving wall-to-wall coverage in the United States. Al-Jazeera reported a 2,500% increase in web viewership during the revolt, with more than half of the upsurge coming from the U.S.  By February 11th the long-time dictator Hosni Mubarak had resigned.  The Arab Spring led to a European summer, especially notable in Spain and Greece – these rebellions also continue.
While these uprisings were occurring, the United States was already in revolt but for the most part it was not covered by the media.  The media did take note of the occupation of the capitol in Wisconsin, and to a lesser extent in Ohio and Michigan, but those were the tip of the iceberg of a widespread revolt.  There were protests multiple times a week on a range of issues including closings of schools, tuition increases, mountain top removal for coal, austerity measures, health care, banking, foreclosures, failure of big business to pay taxes, climate change, war, torture,  Bradley Manning – the issues and actions go on and on.  There is a sampling of protest videos in this article, It Can Be Done. Now is the Time, published in July to convince people that the time was right to successfully occupy Freedom Plaza.
To read the entire article, please click on the link provided below:
http://globalresearch.ca/index.php?context=va&aid=28570
Posted by Stranger in a Strange Land at 5:29 PM