European Parliament Official In Charge Of ACTA Quits, And Denounces The 'Masquerade' Behind ACTA 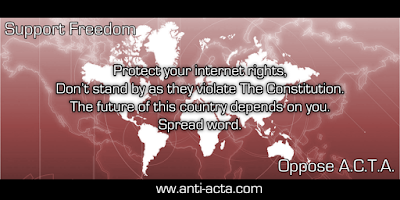 European Parliament Official In Charge Of ACTA Quits, And Denounces The 'Masquerade' Behind ACTA

This is interesting. Kader Arif, the "rapporteur" for ACTA, has quit that role in disgust over the process behind getting the EU to sign onto ACTA. A rapporteur is a person "appointed by a deliberative body to investigate an issue." However, it appears his investigation of ACTA didn't make him very pleased:


I want to denounce in the strongest possible manner the entire process that led to the signature of this agreement: no inclusion of civil society organisations, a lack of transparency from the start of the negotiations, repeated postponing of the signature of the text without an explanation being ever given, exclusion of the EU Parliament's demands that were expressed on several occasions in our assembly.

As rapporteur of this text, I have faced never-before-seen manoeuvres from the right wing of this Parliament to impose a rushed calendar before public opinion could be alerted, thus depriving the Parliament of its right to expression and of the tools at its disposal to convey citizens' legitimate demands.”

Everyone knows the ACTA agreement is problematic, whether it is its impact on civil liberties, the way it makes Internet access providers liable, its consequences on generic drugs manufacturing, or how little protection it gives to our geographical indications.

This agreement might have major consequences on citizens' lives, and still, everything is being done to prevent the European Parliament from having its say in this matter. That is why today, as I release this report for which I was in charge, I want to send a strong signal and alert the public opinion about this unacceptable situation. I will not take part in this masquerade.

Pretty rare to find such direct honesty in political circles. That's quite a direct and clear condemnation of the entire process. In terms of process, it will be interesting to see if this has an impact. While the EU did sign on to ACTA today, it still needs to be ratified by the European Parliament (more on that in a little while). Having Arif quit makes a pretty big statement, and hopefully makes it easier for Parliament Members to speak out loudly against ACTA... Still, this is an uphill battle. The supporters of ACTA have been working to get ACTA approved for years. To them, this is basically a done deal.

http://www.techdirt.com/articles/20120126/11014317553/european-parliament-official-charge-acta-quits-denounces-masquerade-behind-acta.shtml
Posted by Stranger in a Strange Land at 2:06 PM