How to Start a War: The American Use of War Pretext Incidents by Richard Sanders 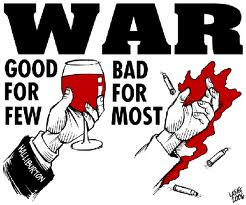 This historical  review raises an important issue: Is the Pentagon seeking to trigger military confrontation in the Persian Gulf with a view to providing a pretext and a justification to wage an all out war on the Islamic Republic of Iran?

As documented by Richard Sanders, this strategy has been used throughout American history. With regard to the confrontation in the Persian Gulf, is the Obama administration prepared to sacrifice the Fifth Fleet based in Bahrain as a means to create public outrage and drum up support for a war on Iran on the grounds of self-defense.

Those opposed to war must address the issue of the "pretext"and "justification" to wage war. These include the "Responsibility to Protect under a NATO "humanitarian" mandate (Yugoslavia, Libya, Syria),  The 911 Attacks and the "Global War on Terrorism" (Afghanistan, Somalia, Pakistan,...), the alleged "Weapons of Mass Destruction" (Iraq).

In the words of Richard Sanders: "The historical knowledge of how war planners have tricked people into supporting past wars, is like a vaccine. We can use this understanding of history to inoculate the public with healthy doses of distrust for official war pretext narratives and other deceptive stratagems. Through such immunization programs we may help to counter our society’s susceptibility to “war fever.” "

To read the entire article, please click on the link below:

Posted by Stranger in a Strange Land at 4:47 PM

Thanks for stopping by for a vist and thank you for your comment.