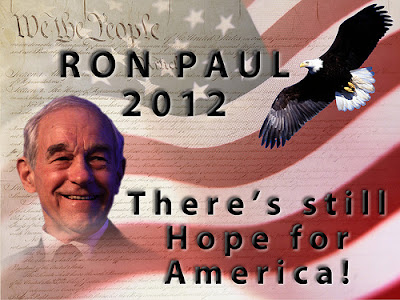 America has one last chance, and it is a very slim one. Americans can elect Ron Paul President, or they can descend into tyranny.

Because he is the only candidate who is not owned lock, stock, and barrel by the military-security complex, Wall Street, and the Israel Lobby.

All of the others, including President Obama, are owned by exactly the same interest groups. There are no differences between them. Every candidate except Ron Paul stands for war and a police state, and all have demonstrated their complete and total subservience to Israel. The fact that there is no difference between them is made perfectly clear by the absence of substantive issues in the campaigns of the Republican candidates.

Only Ron Paul deals with real issues, so he is excluded from “debates” in which the other Republican candidates throw mud at one another: “Gingrich voted $60 million to a UN program supporting abortion in China.” “Romney loves to fire people.”

More importantly, only Ron Paul respects the US Constitution and its protection of civil liberty. Only Ron Paul understands that if the Constitution cannot be resurrected from its public murder by Congress and the executive branch, then Americans are lost to tyranny.

There isn’t much time in which to revive the Constitution. One more presidential term with no habeas corpus and no due process for US citizens and with torture and assassination of US citizens by their own government, and it will be too late. Tyranny will have been firmly institutionalized, and too many Americans from the lowly to the high and mighty will have been implicated in the crimes of the state. Extensive guilt and complicity will make it impossible to restore the accountability of government to law.

Or visit Paul at:

http://www.paulcraigroberts.org/
Posted by Stranger in a Strange Land at 10:42 AM