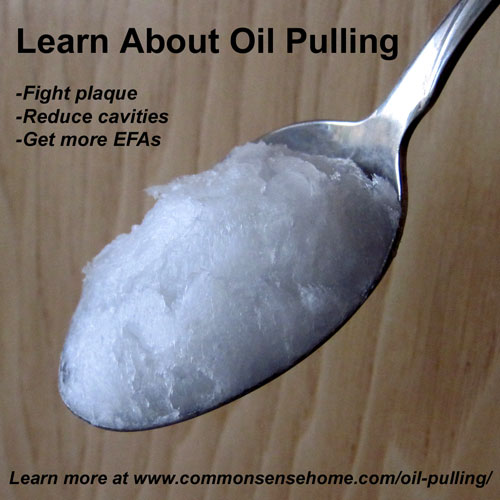 
What is Oil Pulling?

Oil pulling is the act of placing roughly a tablespoon of a good quality oil (preferably unrefined and organic) in your mouth and swishing the oil around for 15-20 minutes, forcing it back and forth through the teeth.  The oil is then spit out (DO NOT SWALLOW THE OIL), and the mouth is rinsed with water or salt water and/or the teeth are brushed.  It depends on which recommendations you follow.

Oil pulling is typically done first thing in the morning, before eating, and can be repeated up to three times per day.  If you don’t have time in the morning, you can do it at other times during the day.  You can watch an oil pulling video if you still have more questions.

Which oil should I use for oil pulling?

Sunflower, sesame and coconut are the most common, but many other oils have been used.  I prefer coconut oil.  I normally use Nutiva.  I keep a jar on my counter that I refill from my gallon container.  On Earth Clinic, contributors discuss using sesame, sunflower, olive, walnut, macadamia, coconut, Udo’s Oil, Total EFA Oil and others.  I have seen some references where people’s teeth took on a yellow tinge from using olive oil, so that probably wouldn’t be my first choice.  Oilpulling.com recommends sunflower and sesame.

Doesn’t putting a large amount of oil in your mouth make you want to gag, and doesn’t your mouth get sore from swishing?

When I first started doing this, it did feel a little weird.  I find the coconut oil easier to use than liquid oil (my coconut oil is solid or semi-solid most of the year).  I put a spoonful in my cheek and let it warm up and melt, and it gives me a minute or two to get used to that much oil in my mouth.  You can start with smaller amounts and work up to a tablespoon.

If swishing for 15-20 minutes is too much, start with 5-10 minutes and work up to a longer time period.  You don’t have swish constantly – you can take a break now and then.  Once you get used to it, it’s really not a big deal, but my cheeks were a bit sore at first.

How do you find time to do oil pulling for 20 minutes?

I usually oil pull as I am getting ready to shower and in the shower, when my kids normally give me a bit of privacy and stop asking questions for a few minutes.  They’ve gotten used to mom responding in  “mmmmm..hhmmm….hmmm…”.  (“Oh you’re oil pulling, okay.  I’ll come back in a few minutes.”)  Then I spit in the shower or toilet.

What does oil pulling do?

To read some claims, oil pulling does everything but cook you breakfast in the morning.  Oilpulling.com lists the following conditions on their “Diseases Cured” page as most frequently responding to oil pulling:

They also list a slew of others that may be helped.  The Coconut Oil Research Center also endorses oil pulling.

Personally, I’ve found that it makes my teeth feel smooth and clean, and has lightened some of my teeth stains but not removed them.  (I’ve been using an herbal detox tooth powder and it stained my teeth quite a bit.)  I notice that it helps clear out sinus congestion.  After pulling for a while, the crud will literally work loose from my nose and throat area, and I can spit it all out when I spit out the oil.

I found several scientific studies verifying that oil pulling is helpful for oral health.  I think other claims would be very hard to measure.

Sesame and sunflower oils on their own do not fight mouth bacteria, but the action of oil pulling changes them (enzyme action and emulsification action) so that they can lift contaminants from teeth – Mechanism of oil-pulling therapy – in vitro study.

Oil pulling may also be a good way to get EFAs (Essential Fatty Acids) into the body subligually (under the tongue) – Detailed discussion of this on Curezone.org

Oil Pulling for Detox? – maybe, maybe not.  I suspect more will be found to show that the detox claims have some validity.

I have read some accounts of people who have experienced mouth irritation from oil pulling.  If this happens, discontinue, try a different oil or pull less frequently.  Don’t swallow the oil, because it looks like it will be filled with dead bacteria and other things that are better out than in – not a yummy.

Posted by Stranger in a Strange Land at 12:51 PM