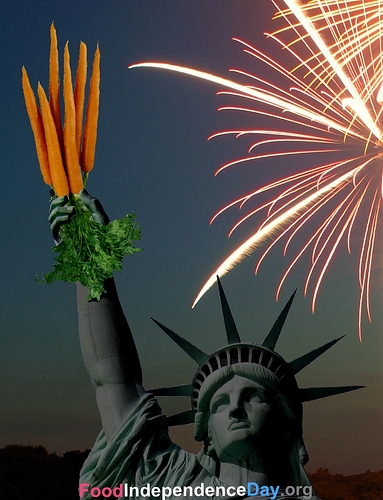 Florida Man Refuses City Order To Destroy His Own Garden


“A lot of us have gardens, but is there such thing as just…too much of a good thing?”

The co-anchor responds, “The City of Orlando says when it comes to one house, the answer is Yes…”
Jason Helvingston was ordered to destroy his 25 x 25 micro-irrigated front yard veggie garden on his own property by November 7th but it’s still there – “and that’s the problem” chimes another news anchor standing among the fruits of his labor, discussing the city’s problem (not the residents’) with the Orlando, Florida man. WKMG Local 6

“You’ll take my house before you take my vegetable garden,” Jason said. “There’s nothing wrong here, there’s nothing poisonous here. This is a sustainable plot of land.”
As always, it’s only select bureaucrats who are filing the complaint for a code violation that wants yards with a “finished appearance…clean, and inviting.”

But destroying this man’s garden is an oddity considering that the City Planning Division’s mission statement reads:

To inspire and facilitate the development of a well-planned, diverse, and sustainable community to make Orlando more livable for its citizens, businesses and visitors.

Another keynote in cases like these is that no one else seems bothered by his yard. Fellow resident Shelly Snow said, “(I’m) definitely not bothered by it. As a matter of fact, we love it.” He has around 200 signatures for a petition, has garnered other resident support and will argue his case with a code board in December in hopes they will change their restriction.

With hope, the city will not come when he is away and mow it down like a city did with a poverty-stricken woman in Tulsa, OK who came home to find her vegetation and medicinal herbs completely excavated – even though, she followed the code.

Jason has already tried reasoning with the city by offering to build a fence, but from his experience, the Tulsa example and Toronto below, we find that reasoning and compromise don’t go far.
Things fair just as bad in Toronto when community gardeners discovered that the city destroyed their garden saying it was “illegally planted” even though the gardeners had worked with the city. Of course, they waited until harvest time, until months of toil had gone into the plot, before destruction – allowing no one to benefit from the food or save their rare heirloom seeds.

Also, do you notice the further degradation and forced subservience in having to destroy your work with your own hand on command? Whether it’s gardens, raw milk and cheese, or pigs – it’s often the victim who is ordered to take up the sacrifice himself.

If we can’t rely on authorities to use compassion and common sense during economic desolation and hunger crises – then what on earth are they doing running our towns? It’s not a lack of common sense – it’s a blatant power play. As always, they tend to quietly run down the average citizen until they know everyone’s watching – then they fear going hungry. And yet, it keeps happening.

Jason is not budging – and is another in a long line of gardeners who literally stood their grounds. Which Orlando needs right now because apparently he’s not the only one there growing a garden with fears of removal.

One remembers the Victory Garden days when Helvingston says:

This is another example of the government telling us what we can do with our own property — that should never happen – In any economic downturn in the past history of the United States, the government has always encouraged the people to grow their own food, and so we want to continue with that movement.

Helvingston keeps backyard chickens which don’t seem to be under contempt. TreeHugger muses that his yard must be like a mullet: business in front and party in the back. It is, however, a way for the city to usurp his property; and if bureaucrats continue to dictate and destroy front yards, the privacy of backyards may rapidly disappear.

TreeHugger encouraged Orlando residents to respectfully voice their support to City Planning and we are also posting it here: