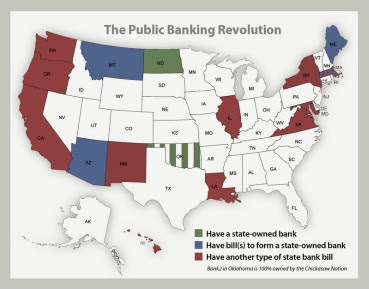 The Way To Occupy A Bank Is To Own One


by Ellen Brown
Global Research Canada,  December 16, 2011
"North Dakota has profited from a state-owned bank for 90 years. Why not Maine?"
The campaign to "move your money" has gotten a groundswell of support. Having greater impact would be to "move our money" -- move our local government revenues out of Wall Street banks into our own publicly-owned banks.
Occupy Wall Street has been both criticized and applauded for not endorsing any official platform.  But there are unofficial platforms, including one titled the 99% Declaration which calls for a "National General Assembly" to convene on July 4, 2012 in Philadelphia.  The 99% Declaration seeks everything from reining in the corporate state to ending the Fed to eliminating censorship of the Internet.  But none of these demands seems to go to the heart of what prompted Occupiers to camp out on Wall Street in the first place – a corrupt banking system that serves the 1% at the expense of the 99%.  To redress that, we need a banking system that serves the 99%.
Occupy San Francisco has now endorsed a plan aimed at doing just that.  In a December 1 Wall Street Journal article titled “Occupy Shocker: A Realistic, Actionable Idea,” David Weidner writes:
[P]rotesters in the Bay Area, especially Occupy San Francisco, have something their East Coast neighbors don't: a realistic plan aimed at the heart of banks. The idea could be expanded nationwide to send a message to a compromised Washington and the financial industry.
It's called a municipal bank. Simply put, it would transfer the City of San Francisco's bank accounts—about $2 billion now spread between such banks as Bank of America Corp., UnionBanCal Corp. and Wells Fargo & Co.—into a public bank. That bank would use small local banks to lend to the community.
The public bank concept is not new.  It has been proposed before in San Francisco and has a successful 90-year track record in North Dakota.  Weidner notes that the state-owned Bank of North Dakota earned taxpayers more than $61 million last year and reported a profit of $57 million in 2008, when Bank of America had a $1.2 billion net loss.  The San Francisco bank proposal is sponsored by city supervisor John Avalos, who has been thinking about a municipal bank for several years.
To read the entire article and for more information on how to start a public bank, please click on the links provided below:
http://www.globalresearch.ca/index.php?context=va&aid=28238
http://PublicBankingInstitute.org.
http://WebofDebt.com
http://EllenBrown.com.
Posted by Stranger in a Strange Land at 11:10 AM