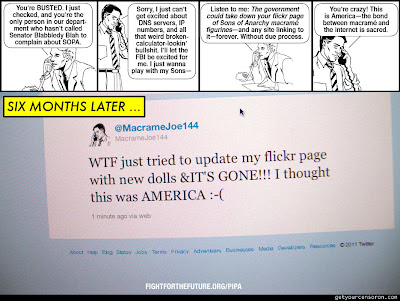 The giants of the digital economy, among them Google, Facebook and Twitter, have voiced their concerns over a proposed US anti-piracy bill. Rights groups are also worried as the law could limit free speech gagging sites like WikiLeaks.

Web companies have written a letter to the US government showing their opposition to the Stop Online Piracy Act (SOPA), saying that it poses risks to the internet.

"Unfortunately, the bills as drafted would expose law-abiding US internet and technology companies to new uncertain liabilities, private rights of action, and technology mandates that would require monitoring of websites," they wrote in a letter to the House of Representatives and Senate Judiciary committee.

The lawmakers behind the “rogue websites” bill say it would deal a blow to online pirates and producers of counterfeit brand products like designer fashion items or medicines. If approved, SOPA will enable individuals or organizations claiming copyright to effectively block any website they suspect of infringing their rights. They would simply send complaints to advertisers, payment services, search engines and even internet service providers operating in the US, who would stop doing business with the suspicious website.

However, web giants asked the lawmakers to reconsider the legislation and to explore methods to fight piracy “while preserving the innovation and dynamism that has made the internet such an important driver of economic growth and job creation.”

Google chairman Eric Schmidt has labeled the measures proposed by the bill as “draconian.”

The US House of Representatives is due to debate the bill on Wednesday.

SOPA is being supported mainly by the music and film industries, which first of all seek protection of intellectual property.

The Motion Picture Association of America said the law would allow the US Department of Justice “more effective tools to protect American intellectual property, including the films, television shows and sound recordings created by our members”.

However, the legislation also sparked concerns among some human rights groups that fear that the law could have huge effects on freedom of speech by gagging whistleblowers and hampering the work of human rights advocates. There is a possibility that SOPA could harm WikiLeaks as the US Department of State could copyright their leaked cables to give them protection under new law.

If you live in the States, you might wish to look at the information below:

http://www.getyourcensoron.com/
Posted by Stranger in a Strange Land at 10:35 AM