A Public Service to the Citizens of Ohio


As a good citizen, I am doing my civic duty by posting this public service announcement from the Columbus, Ohio Police Department.  To those who fit into any of the categories mentioned, it may be best to take the bypass around Columbus if you are travelling through Ohio.  This will save the good, honest taxpayeing citizens of Ohio some money of theirs that is being spent foolishly by a government agency that appears to work against them rather than for them.  Spreading suspicion and fear or insecurity by their very actions.

Now, my very best wishes to all the citizens of the great state of Ohio, especially those who still believe in the Constitution and the core values of tolerance and freedom that America was founded upon.

Here is the anouncement which can be found on the website, whose link I will supply at the end of this blog entry.

What Should I Consider Suspicious?


The following information is intended to list characteristics of persons that may be involved in terrorist activity that are described as “sleepers” or otherwise persons who camouflage their involvement in terrorist activity or planning by attempting to fit in with others in our society.

 Purchase of chemicals or other dual use materials
 Scouting out military bases, government buildings and other potential targets

 Support for militant Islamic groups
 Excusing violence against Americans on the grounds that American actions provoked the problem
 Fury at the West for reasons ranging from personal problems to global policies of the U.S.
 Conspiracy theories about Westerners (e.g. the CIA arranged for 9/11 to legitimize the invasion of foreign lands)
 Accusing the West of trying to destroy Islam

What Should I Do?

Do not jeopardize your safety or the safety of others.

You can find the official announcement at:


You might also wish to look at this earlier blog entry to see the inspiration for this one: 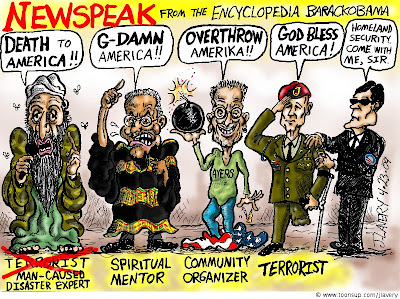 Posted by Stranger in a Strange Land at 3:30 PM