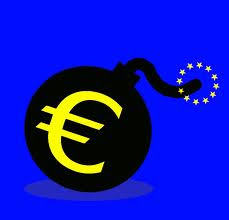 The Euro Zone and the Crisis of Sovereign Debt
by Bob Chapman
Global Research Canada, February 4, 2012
The creation of the euro zone may have given participants one currency, but it created other problems as well. One interest rate was supposed to fit all. Those sovereigns on the financial periphery of the 17 nations found low interest rates too good to be true. As a result, the borrowed funds they shouldn’t have borrowed to finance current debt, was thrown off by the economy. During the 1990s we wrote that one interest rate for all would destroy the euro, but as usual no one wanted to listen. The reason was simple, each nation was and is at a different stage of development and a nation paying 2% rates could now borrow at 4%, which is a giant difference. As debt grew the credit crisis occurred and the rules changed externally. As rates rose sovereigns got into more and more trouble.
European banks were allowed to purchase sovereign bonds leveraged at 40 to one versus their existing capital. Normal prudent leverage is 9 to one. That means any sort of trouble was mega trouble. The result of this is what you are seeing today.
To read the entire article, please click on the link provided below:
That is why Greece and others are in such trouble today. The banks created too much money and in their greed buried themselves and the sovereigns who the bankers know should have never had those loans in the first place. The result of the bank lending and political borrowing has led to the current state of affairs, insolvency. The size of debt cannot be sustained.

In the case of Greece, discussions are talking in terms of defaulting on 70% of debt, which we do not believe will solve the problem. Greece will have 50 years of austerity and poverty, all this to remain in the euro zone where hopelessly they cannot compete. If they can’t compete why would they stay in the euro zone? It is all about Greek leadership and its connection to bureaucrats, bankers and others that demand their inclusion into world government.

As of late interest rates have been falling from their lofty heights with the help of a $1 trillion loan from the Federal Reserve. We suppose that will continue over the next year. The rates will depend on internal events as well as external. Pushing against interest rates will be inflation, massive money creation, growing debt, stagnant economies, the threat of Greece, Ireland, Portugal, Belgium, Spain and Italy going into default and a possible lack of credit that will restrict world trade. Lenders already see European banks cutting back in the commercial loan area as the spectra of tariffs, particularly in Europe and England stalk our world. A reflection of the above is that European banks won’t even lend to each other, due to lack of trust. The EU and the euro zone were bad ideas from the very beginning. It has been one vast orgy of spending, debt, and trade imbalances, showcased in all the profligacy of banking. Germany is in a really difficult spot, austerity reins, losses from bond holdings face them, and the weak countries such as Greece need even more money to survive. If Germany lends and funds losses they can extend the game. If they do not the system comes unglued. If you look at the numbers you will see that Portugal is where Greece was last year and that Italy is where Portugal was last year. Thus, if little changes it could be that along with Spain they could fail one after another year by year and they probably will. That will allow the bankers to greatly string out their problems, which they are very adept at doing. A country like Greece even with a 70% debt write off, and staying in the euro, as we have said before, will live in poverty for the next 25 to 50 years. A full default and exit from the euro would leave them with a 5 to 10 year depression. At first the latter will be disastrous. The barter system and a rampant black market will flourish. Then austere normality will occur. The next Greek election is two months away and the opposition has been dragging their feet trying to get more bailout support and then put their own touch on to develop the future.
If Greece does a partial default they will be on life support for years within the euro zone. Their partners won’t like it, but their thought process is aid in perpetuity in exchange for economic and financial existence, as a part of the euro zone – EU units. EU members know that if Greece leaves, Portugal and Ireland will follow, perhaps followed by Belgium, Spain and Italy. If that happens the EU could fail and the Illuminists’ dream of world government could end. Yes, there is no doubt in our minds that the Greeks are stalling until their April election. In the meantime they want Germany to financially carry them. We do not see any option for Germany but to carry them. Otherwise, the euro and EU may blow-up as a result of that default. All these noises that Germany is making are for show. They know what we know. The euro zone position is weak and they know it. Greece fails and the avalanche follows, as Portugal and Ireland follow the same path.
Making things more difficult are the French elections. Can France’s Sarkozy and Merkel’s Germany take the political risk of saving Greece at this late date? Yes, we think they have too. The loss of Greece, Ireland and Portugal would cause chaos and they know it. Thus, there will be a stopgap financing before the end of March. Waiting in the wings are the debt of Spain and Italy of some $4 trillion. Italy has to roll $455 billion in current debt this year. Does one think that is possible? We think Italy and Spain will use ECB loans to roll their bonds and fund their governments. That means that debt is really being transferred from respective governments to the ECB, which is to the people. The next year, 2013, the same could happen – it’s either the Fed supplies more money or the banks fractionalize. There is no question the sovereigns would choose the ECB because of 1% interest rates and the reluctance of the ECB to call default on the loans. Needless to say, such actions would cause the euro to decline versus all currencies and particularly versus gold and silver. You can see again why you do not want to be in currencies.
http://www.globalresearch.ca/index.php?context=va&aid=29065
﻿
Or:
http://theinternationalforecaster.com/
﻿
Posted by Stranger in a Strange Land at 2:13 PM

Takes for the comment and thanks for visiting,
Mike