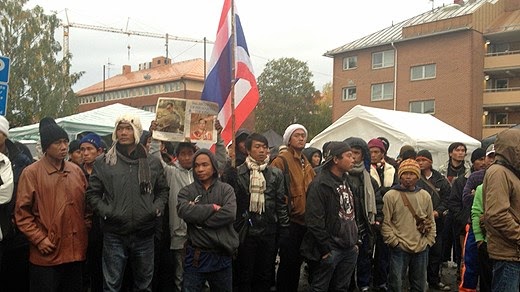 This has become an annual event in Sweden in which Swedish Berry Companies and Foreign Employment Agencies play a shell game to cheat poor labourers who come to Sweden with the hope of returning to their homeland with a generous salary.  This has been a recurring nightmare for not just the Thais but also for Bulgarians, Chinese and Vietnamese.

The Swedish Government is allowing it by not really taking any action.  Laws or rules are established but not enforced.  The only way that this will stop is by the Governments taking action in the Berry pickers countries of origin.

I will predict that Swedish News Agencies will be reporting the similar events five years from now unless censorship inceases here and there will become a total blackout of such happenings in the Swedish communities.


Below I have included a copy of the article that inspired my little discorse above.


The 150 berry pickers who have protested in Umeå, northern Sweden for nearly two weeks will return to Thailand without being paid, but the Thai state has vowed to help them sue their employers.

The local Västerbottens-Kuriren newspaper reported that the Thai workers will probably leave Sweden on Monday and that the Thai state will help them take legal action against the recruitment company in Thailand that hired them.
Suing the company would not cost anything for the berry pickers and a solution could be presented within 45 days.

At a press conference on Sunday, it became clear that the Thai workers are happy to go home, Swedish Radio News reported. The union Kommunal and the Thai Department of Employment participated in the press conference.

Around 150 Thai berry pickers have camped out at a parking lot in Umeå since last Tuesday in protest against their Thai employers, who had not paid their wages. They are the latest group of workers to have come to Sweden thinking they would earn good money picking berries, but who instead ended up living in poor conditions.

For more background information on the treatment of berry pickers in Sweden, please refer to the links proviided below:

This is about the same going on in Finland.  I haven't followed up to see if the Finns has shaped up their business practices or not:

Posted by Stranger in a Strange Land at 11:47 AM