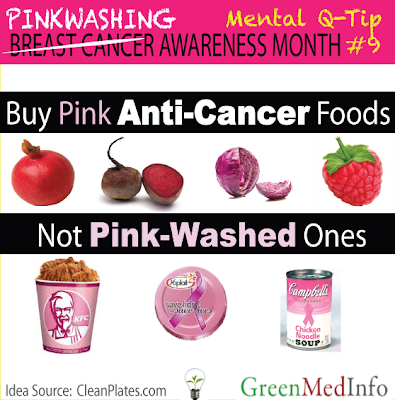 
There are plenty of "pink" products in support of breast cancer awareness, but why not just cut out the middle man and eat naturally pink anti-breast cancer foods?


It's Breast Cancer Awareness Month, when companies love to showcase pink packaging...but sometimes, what's inside those packages isn't so healthy. So we've rounded up 8 naturally pink foods that have all been shown to help keep away breast cancer. Always choose organic to avoid pesticides and toxins. Go, Mother Nature!


A compound called indole-3-carbinol (also rich in cruciferous vegetables) is now being researched for its potential to significantly reduce the incidence of breast cancer.

Extract of red beetroot has been shown to help suppress multi-organ tumors in lab tests, and experts are considering using them in combination with traditional anticancer drugs to reduce their toxic side effects.

High in antioxidants, these have been shown to help reduce the spread of breast cancer cells. Additionally, a lab study with Japanese radish sprouts significantly lowered the incidence of mammary tumors.

Full of beta carotene like their orange counterparts, the red and purple in these heirloom carrots indicates extra antioxidant power.

Not to be confused with yams, the pink-skinned or purple versions of these are high in antioxidants. Orange flesh indicates beta carotene—shown to reduce breast cancer risk by as much as 25% when eaten regularly. And a Japanese study on rats showed that sweet potato extracts reduced existing breast cancer tumors, and held back the growth of new ones.

Choose red ones for the rich antioxidants in their skins: you'll get the same cancer-fighting component as in wine, but without the alcohol, which some studies suggest can boost cancer risk.

Posted by Stranger in a Strange Land at 2:50 PM

Pink and red grapefruits are high in lycopene, an antioxidant that helps in fighting cancer. Pink foods that have all been shown to help keep away breast cancer. cancer care center