Established in 1955, the National Health Federation is an international nonprofit, consumer-education, health-freedom organization working to protect individuals' rights to choose to consume healthy food, take supplements, and use alternative therapies without government restrictions.

And/Or read this article from Green Med Info: 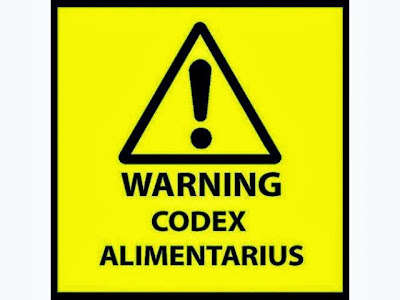 Posted by Stranger in a Strange Land at 1:51 PM

This CODEX item has brought back memories on this subject. I've been aware and fought CODEX over the years as they slowly moved to gain control country to country starting in Germany as far back as I recall, in the late 1990s. Britain had not bowed to CODEX as far as I know but I've not been involved on this issue for sometime now as frankly I gave up because no one was listening as slowly but surely their grip was tightening.

So well done Mike for bringing this once again into the foreground and opening up this disgusting 'box' relating to our health freedoms now that it has now reached the USA. Hhhhhmmmm - we shall see. Michael B.

Ps - Giving something a Latin name such as CODEX ALIMENTARIUS fools many as to its importance - which is the intent.