A Rally Against Mass Surveillance on Saturday, October 26th in Washington DC 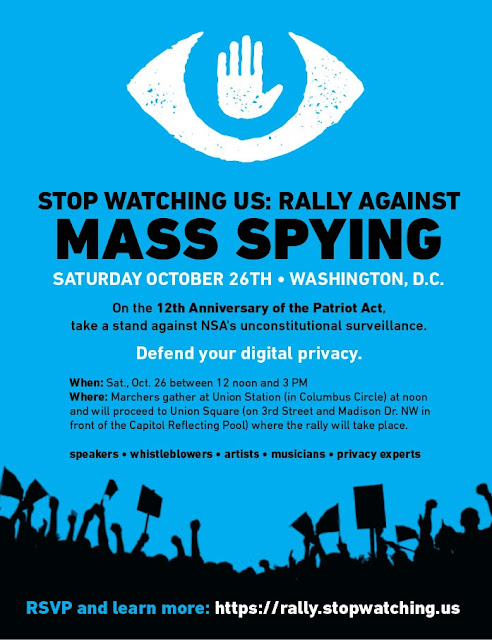 
The NSA is spying on everyone's personal communications. It’s operating without any meaningful oversight.

On October 26th, the 12th anniversary of the signing of the USA Patriot Act, we're holding the largest rally yet against NSA surveillance. We’ll be handing more than a half-million petitions to Congress to remind them that they work for us — and we won’t tolerate mass surveillance any longer.

A stellar group of whistleblowers, activists, researchers and others from both sides of the political spectrum will be speaking at this historic event. The list includes:

Marchers will gather in front of Union Station at 11:30 a.m. by the Christopher Columbus Memorial Fountain in Columbus Circle. Shortly after noon we’ll march to the National Mall at 3rd Street and Madison Dr. NW, in front of the Capitol Reflecting Pool, where there will be a stage set up for our rally speakers, musicians, and performers.

How the Government Tracks You: NSA Surveillance  Video


Spread the word information link
Posted by Stranger in a Strange Land at 2:02 PM