The Great Myth of the FDA as Protector of our Health


Just like we’ve been taught to bow to the white coats, we’ve also been conditioned to think that whatever the Food and Drug Administration approves must be safe. Nothing could be further from the truth. This organization is supposed to be a governmental watchdog over our food supply and public health, as well as an agency to keep medicines or other proposed ‘cures’ – both natural and pharmaceutical – from doing us harm. The FDA is supposed to block the interests of greedy corporations who want to make a fast buck, but its original intentions, if they were ever pure, have been tainted.

Political maneuvering, lobbying, racketeering, and outright corporate infiltration of the FDA has made the institution a complete waste of tax payer money, and worse, an absolute detriment to our overall food and medicine safety. Just because you see ‘FDA’ approved on something anymore, doesn’t mean it is safe. FDA drugs have been responsible for over 140,000 deaths in hospitals every year – some would call that an epidemic. Others go as far as to accuse the FDA of mass homicide of the American people.


Consider this: just one FDA approved pain drug called Vioxx (rofecoxib) has been responsible for over 139,000 heart attacks and was only pulled off the shelves after tens of thousands of people died. Merck, it’s maker, raked in over $2.5 billion in sales. How about the thousands of women who had children who now suffer from reproductive cancers because they took FDA approved DES (diethylstilbestrol)? This isn’t even touching on FDA approved GMOs.

According to the book, Prescription Alternatives written by Earl L. Mindell, R.Ph., Ph.D., and Virginia Hopkins, M.A., the following are the most common prescription drug categories (yes, FDA approved) with adverse drug reactions that are completely preventable with natural healing therapies:


Many people who don’t want to throw the baby out with the bath water say that you shouldn’t use a pharmaceutical drug unless its been on the market for over ten years – but you could also just ditch pharmaceuticals altogether. The dishonesty of this industry won’t be stopped by fines, after all, their pockets are too deep. A few million in lawsuit settlements or court fees, and another few million in fines, are a drop in the bucket to companies like Merck and Pfizer. Global Big Pharma has been fined more than $11 billion in the last three years for ‘nothing less than criminal wrongdoing,’ but this doesn’t stop them.

Greenpeace to FDA: Stop Misleading the Public About GMOs


We shouldn’t trust the FDA, nor its drug pushers – medical doctors. While there are some doctors who actually care about their patients’ health and act vigilantly to protect it, most of them are courted by pharmaceutical companies to prescribe or give as free samples, an entire cornucopia of meds. Some are given to treat health concerns, others to treat depression or ‘mental illness,’ with hardly a care for what would actually benefit the patient. Very simple solutions such as more rest, more exercise, less stress, or a simple herbal remedy that sells over the counter for a few dollars are often overlooked or dismissed.

Turning to natural treatments that have stood the test of time for thousands of years, not a few ‘clinical’ trials, is the way to take our health back. We can ignore the advice of the FDA, do our own research and use our collective intelligence and the ancient wisdom our ancestors have passed down to us to treat just about every conceivable health issue. We can no longer take our pills apathetically and stay silent. It is time to make a radical shift and be responsible for our own vitality. 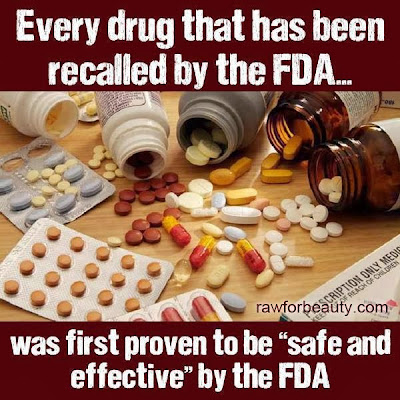 Posted by Stranger in a Strange Land at 3:21 PM