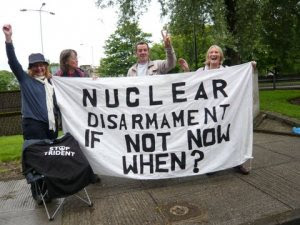 Arrested for ‘giving peace a chance’


Peace Campaigner, Sylvia Boyes, spent two nights in police custody when she hung a ‘Give Peace a Chance’ banner outside the Faslane Nuclear Submarine Base in Scotland.  The incident happened on Saturday 7th July when Sylvia and a fellow campaigner from the Faslane Peace Camp, decorated the North Gate with banners and blockaded the entrance, refusing to allow entry to a cyclist and a delivery man.

In a later statement, Sylvia said:

On Monday 9th July Sylvia was handcuffed and taken to Dumbarton Sheriff’s Court, where she was placed in a holding cell with other female prisoners, to then be let out an hour later having had no court appearance or official charge made.

“To spend almost 48 hours in a cell with nothing but a mattress, pillow, blanket and toilet does seem unnecessary, yet I was released before I had a chance to justify my action!”

Sylvia believes this tactic is increasingly being used by the police to remove protesters from demonstrations without the need to establish formal charges and court cases, which would allow for the issues to be discussed openly in the public domain.  Had Sylvia accepted her bail conditions of not re-joining the Faslane Peace Camp she could have been released earlier, however, Sylvia remains defiant that her involvement in peace camps is essential to make the point that what happens behind the weld mesh fences, razor wire and police security does not happen in her name.

The annual Faslane peace camp is now in it’s 30th year and the area has been a focal point for much ‘civil disobedience’ in response to the nuclear submarines which are inspected at Faslane Naval Base after their tours of duty.  One of the most memorable protests was when Sylvia boarded a US Military plane in 2006, a video highlighting this action can be viewed here.  Yet despite being a veteran peace campaigner, when it comes to arrests and internment, Sylvia admits:

“You have to work hard to not allow the experience to be stressful”.

It is questionable what arrests like this achieve, for upon her release and still not deterred from protest, Sylvia walked outside the perimeter of Coulport Trident Base and across the very hills that store the Trident War Heads in silos deep underground.  Once again Sylvia found herself stopped by police but this time negotiated a 15 minute peace vigil before being accompanied for the remainder of her walk; arguably a much more beneficial tactic for both the protester and the state.

To read the rest of this article, please click on the link provided below: 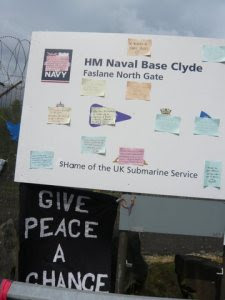 Posted by Stranger in a Strange Land at 2:52 PM