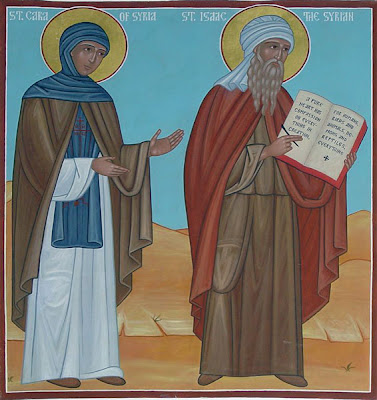 "A compassionate heart is one on fire for the whole of creation: for humanity, for birds, animals, demons, and all that exists ... even our enemies, even the reptiles."


A Nun from Damascus: "We have no trust in these so-called 'revolutionaries'
Global Reasearch Canada,  21 July 2012
(Agenzia Fides) - Refugees continue to knock on the door of the Shrine of Tabbaleh, dedicated to the Conversion of St. Paul in Damascus. The Franciscan friars of the Custody of the Holy Land and the Franciscan Missionary Sisters of the Immaculate Heart of Mary, who run the Church, have welcomed eight families permanently and provide maintenance to 45 other families, Christians and Muslims. They are refugees from Damascus, the civilian victims of the clashes between the regular army forces and revolutionary groups that in recent days have put the city to fire.

"We walk in hope and try to comfort all in these tragic hours," says to Fides Fr. Romualdo Fernandez OFM, Rector of the Sanctuary, telling a crowd of people who come every day to pray in the Church, and spontaneous circles of Christians and Muslims are formed to pray together for peace and ask for God and the Virgin Mary’s protection.

Suo Yola, one of the Franciscan women religious who every day help the families of refugees, told Fides:
"We are doing our best to help the displaced families. People cry and hope for better times. The cost of living is very high, there are no medicines, the impact of the embargo that we suffer is all on the civilian population and on the poorest. We hope and pray that this suffering will end soon. We have no trust in these so-called 'revolutionaries'. Who are the revolutionaries who harm the people? They have corrupted all, Christians and Muslims, many families who have lost everything. "


"In these armed actions and in this suffering - the nun continues - religion has nothing to do with it. With Muslims we have always lived side by side and we will continue to do so. The Syrian government has hitherto been secular, has guaranteed security and stability to Syria . Today we have only chaos, insecurity, and suffering. And what will happen tomorrow? But we know, as Christians, that God protects us and our hope is alive. And as Christians, we know for certain: we will never abandon Syria."

Posted by Stranger in a Strange Land at 11:01 AM