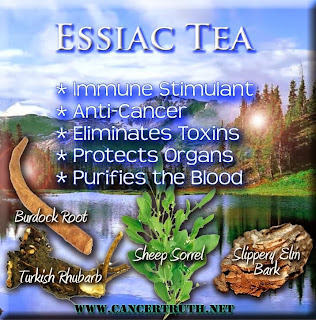 
Since the 1920’s, a renegade nurse treated thousands of cancer patients in Canada with a little known tea made up of just four simple ingredients. By combining Burdock Root, Turkey Rhubarb (used in Chinese medicine to cleanse the colon), Sheep Sorrel (the whole plant including the root) and Slippery Elm (not yellow dock or curly dock as some companies now substitute the herbs in the formulas) Rene Caisse passed on a medicinal wonderwhich was said to have been passed to her from the Canadian Ojibwa Indians.
Caisse worked with cancer patients for decades, even enduring jail time due to her actions threatening Canadian drug companies. She was proving to be very successful in ‘treating’ cancer with her special tea. The drug companies charged people through the nose for their cancer treatments, but Nurse Caisse charged absolutely nothing.

Her treatments were, in fact, so successful that in 1938 when she was being punished for helping so many people, more than 55,000 supporters signed a petition to support her ongoing efforts. A bill was also presented in Ontario, which would have allowed Caisse to continue to practice ‘treating’ people, but it lost by only three signatures.
Her name spelled backwards is the name for this cancer-curing wonder, Essiac Tea. Her funeral was in 1978, and though she was once targeted for ‘practicing medicine without a license’, hundreds of cancer patients showed up at her funeral to show respects to the 90 year old woman who saved their lives.
Read: Woman Uses Carrot Juice to Treat Stage 4 Cancer
Since Caisse’s time, the Chinese government has now tested Essiac tea extensively and now lists it as a cancer ‘medicine.’ The news of this herbal tonic has been quashed like many other natural remedies, by Big Pharma and drug companies who make huge profits off of people suffering from cancer.
Later, the Essiac tea recipe was expanded to include Blessed Thistle, Kelp, Red Clover and Watercress to make it even more potent.
Sheep sorrel, like so many other cancer-fighting plants, is also usually considered an unwanted weed. Caisse knew this was one of the most important ingredients from her advice given by her elderly Indian friend, and she even wrote a letter to Dr. Chester Stock of the Memorial Sloan Kettering Cancer Institute, the world’s oldest and largest private anti-cancer establishment, trying to convince him of its efficacy.
Following is a recipe for the original formula, You can also reference books written on the topic or see your own naturopathic doctor to confirm if it is right for you or someone you love:
Mix these ingredients thoroughly and sore in glass jar in dark dry cupboard.
Take a measuring cup, use 1 ounce of herb mixture to 32 ounces of water depending on the amount you want to make.
I use 1 cup of mixture to 8 x 32 = 256 ounces of water.  Boil hard for 10 minutes (covered) then turn off heat but leave sitting on warm plate over night (covered).
In the morning heat steaming hot and let settle a few minutes, then strain through fine strainer into hot sterilized bottles and sit to cool.  Store in dark cool cupboard.  Must be refrigerated when opened.  When near the last when its thick pour in a large jar and sit in frig overnight then pour off all you [can] without sediment.
This recipe must be followed exactly as written.
Use a granite preserving kettle (10 – 12 qts), 8 ounce measuring cup, and a small funnel to fill bottles.
Source:


Posted by Stranger in a Strange Land at 3:07 PM

"A Healthy Tea Remedy" for Cancer is a good one Mike. I'll use it in my column here if that's ok with you?

My best,
Michael B.

No problem at all.