Robin Stavola is a mother who tragically lost her young daughter, Holly, to the second MMR vaccine dose, which was a requirement for Holly to attend kindergarten in New Jersey.
After Holly suffered a severe reaction to the vaccine, leaving her convulsing, brain damaged and on life support, her family was told by the doctors that Holly would remain in a vegetative state and would not recover. Holly’s parents felt helpless and they reluctantly agreed to have their daughter removed from life support.
Robin was awarded compensation for Holly’s death after it was determined the MMR vaccine caused Holly to suffer acute encephalopathy.
After a long battle and without success, Robin fought to change the National Vaccine Injury Compensation Program. She learned most parents that file a vaccine injury claim get denied compensation.
With support from the governor of New Jersey, Holly’s Law was created.  This law can save your child from receiving a potentially lethal second dose of the MMR vaccine, required for some children to attend school, if no vaccine exemption was filed on their behalf.
The second MMR vaccine dose, listed on the CDC recommended vaccine schedule, is not actually a booster vaccine; it is recommended or mandated because Merck states two to five percent of children don’t obtain levels of protection from the first MMR dose and that all children should get a second dose, to cover those who didn’t gain protection from the first one.
When Holly lay suffering for 65 hours in the two hospitals she was transferred to, her pediatrician did not even show up to visit her. Pediatricians push the vaccines but often don’t show up to the hospital to help care for your child when they become vaccine-injured.
Even the hospital chaplain wasn’t sincere when Holly was fighting to survive. Grieving family members are led to believe hospital chaplains are there to help them grieve, but some of them are actually paid to help increase the number of organ donations.

“We Trusted the Doctors When They Said Vaccines Were Safe”

In honor of Holly, her mother Robin shares,
“Holly Marie Stavola was born January 18, 1995. She was born on time and was born a healthy baby, with no complications. We trusted the doctors giving her vaccines and followed the schedule as recommended.
I wasn’t given any vaccine information sheets or information on how to recognize a severe vaccine reaction. When it was time for Holly to receive her first MMR vaccination at sixteen-months old, she was given the MMR and Hib vaccines during that visit.
After she received the vaccines, she was back in the office with a fever, lethargy, no appetite, crying more, ear pain, and a cough that lasted for seven consecutive weeks.
She skipped three weeks where we didn’t go into the pediatrician’s office. We returned one-and-a-half weeks later, when Holly had another fever and no appetite.
We returned once again one-and-a-half weeks after that, due to a continued fever.
Unbelievably, eleven days later after this stretch of pediatric SICK visits, Holly’s doctor gave her an oral polio vaccine (OPV) and her fourth DTaP shot.
I was told Holly reacted normally to the previous shots and to continue vaccinating. The doctor didn’t seem the least bit concerned and no doctor warned me Holly shouldn’t get any more vaccines because she could suffer a more severe reaction.
Up to this point, I trusted my pediatrician and had never heard of vaccine reactions back in 1996. When this all occurred, we didn’t have the ability to learn from other parents how much these reactions were really happening.
On January 18, 2000, Holly celebrated her fifth birthday.
On Tuesday, January 25, 2000, a week later, I took Holly in for her five-year well checkup. At this pediatric visit, Holly received another oral polio vaccine (OPV), which was no longer recommended as of January 2000, but she received it anyway, along with the MMR, DTaP, and Mantoux TB test.
The Mantoux TB skin test is a screening tool for tuberculosis. It’s similar to an allergy test. It seems like an allergy test, put an allergen underneath your skin to see how you react but it’s done using an intradermal injection. I like to mention this test because it shows how much they did to her, in the office that day. My nine-year old son Tom received the Varicella (chicken pox) [vaccine] that day as well.”
To read the entire article, please click on the link provided below:
Vactruth 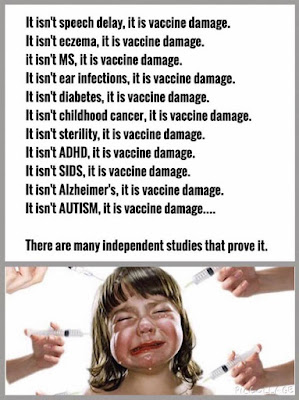 Posted by Stranger in a Strange Land at 11:56 AM