Last month Oath Keepers placed a similar sign at the Pentagon Station stop on the Washington Metro subway. That sign, done in the style of the theater scene from George Orwell’s 1984, featured Director of National Intelligence, James Clapper, as ‘Big Brother” but now the graphic has been upgraded to feature Obama as Big Brother since he remains unrepentant even after Snowden’s embarrassing exposure of a snooping program the Administration denied ever existed. And besides, Obama, as “Commander-in-Chief’ and as the Chief Executive, is clearly the biggest “Big Brother” of them all and is responsible for what the executive branch he leads is doing.

Nonetheless, you can bet there will be cries of “racist!” from the radical left because we dare to criticize their anointed god, despite the fact that we first featured Clapper – about as white a guy as you can imagine – as Big Brother, and despite the fact that Obama is the President, after-all (exactly who should we criticize if not him, for the policies of his Administration?).

The sign makes it clear that by exposing the NSA spying on Americans, Snowden honored his oath, and White House employees should follow his example by exposing other crimes against the Constitution. We do want to make it clear that, as we have stated previously, we are not defending or praising Snowden’s disclosure of U.S. intelligence operations against other countries. We ARE defending and praising his exposure of unconstitutional U.S. intelligence operations against the American people. When the Federal Government violates the Supreme Law of the Land and treats the American people like a foreign enemy, exposing that crime is the right thing to do. And when that government is run by the very criminals who gave the orders to treat Americans like a foreign enemy, the “normal” channels for whistle-blowers are closed and all that is left is to blow the whistle to the real bosses – the American people themselves. Which is exactly what Snowden did.

And the same goes for the Fast and Furious running of guns to the Mexican drug cartels,or for the truth of what happened at Benghazi, and for exposing the clear and imminent DHS preparation for a domestic war against freedom loving Americans, etc. – when the criminals are in charge of the government, the only recourse is to blow the Whistle to We the People so we can put a stop to it.

Those in government have a duty to expose government crimes against the Constitution.
Additional signs will be revealed at other DC area stations, in September, which will be as close to the CIA, DHS, and other national security/intelligence agencies as we can get them. They will continue our campaign to get those in the know, inside government, to fulfill their oaths by simply exposing the crimes against the Constitution that we know are going on.

This is part of a broader effort to place billboards at strategic locations throughout the United States. We already have billboard outside of military bases at Twentynine Palms Marine Corps Base; Fort Benning, Georgia; Fort Hood, Texas; Fort Stewart, Georgia; and Hunter Army Airfield, Georgia.

You can see all of those billboards, and help us in this effort, by going to:

Next up will be billboards at the Marine Corps bases at Camp Lejeune and Camp Pendleton, and at Army bases at Ft. Bragg, NC and Ft. Lewis, WA, as well as outside of the CIA headquarters in VA, and as close to NSA and DHS headquarters as we can get them.

As long as you keep supporting this effort, we will keep putting up billboards till we have them outside of every major military base in America and outside of every major intelligence and national security facility in America. And along with the billboards, we will be handing out pocket Constitutions and issue pamphlets to active duty on the way into the military bases. In fact, our chapter at Ft. Hood, Texas has already handed out over 3,000 pocket Constitutions to active duty soldiers there at Ft. Hood. Way to go, Texas!

It is difficult to imagine a more direct and effective way to change the future course of history in this nation than to directly reach, teach, and inspire our active duty military to honor their oaths, and to encourage more whistle-blowers to expose the ongoing crimes against our Constitution. That is an effective focus of effort. We encourage you to help us, including by volunteering to take part in boots-on-the ground outreach efforts to pass out educational materials directly to the troops outside of the main gates of military bases. Just email us with “Boots on Ground Volunteer” in the headlines, and let us know what state you live in, what base you want to visit and outreach to, and we WILL get you the materials you need to get it done. Together, we will change history for the better and turn the tide. Stay tuned for more details on that direct outreach effort.

PS – here is our press release on this billboard. Feel free to pass it around, along with this article. 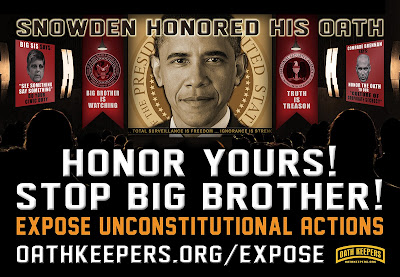 Posted by Stranger in a Strange Land at 4:27 PM