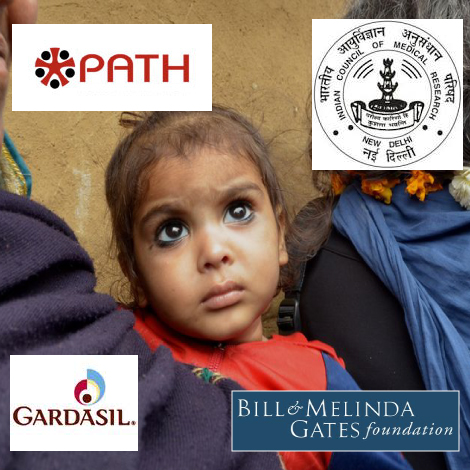 
On 30th August 2013, The Mail India Online, reported that the Indian Council of Medical Research (ICMR) had allegedly played hand in glove with the US NGO, PATH, to promote the commercial interests of both cervical cancer vaccine manufacturers, which they say were linked to the deaths of several young Indian girls.

The Mail stated that the Indian Parliamentary panel had found the ICMR guilty of lending its platform to PATH, in an "improper and unlawful manner." [1]

On the same day as the Mail's article was published, an extremely damning document was released by the Indian Parliament, entitled: Seventy Second Report on Alleged Irregularities In The Conduct Of Studies Using Human Papilloma Virus (HPV) Vaccine By PATH In India, supporting their claims. [2]

The Parliamentary report, stated that the committee had found the Indian Council of Medical Research (ICMR), guilty of helping the US NGO, PATH (Programme for Appropriate Technology in Health), facilitate studies relating to the cervical cancer vaccine on young girls, endangering their lives.

The forty-three-page report clearly stated that PATH's presence in India had been illegal.

Section 1.1 of the report stated that:

"During March, 2010 the entire world was shocked by the media reports about the deaths of some female children and adolescents in Khammam district of Andhra Pradesh after being administered Human Papilloma Virus (HPV) vaccines. The vaccination trials were carried out by an American agency viz. Programme for Appropriate Technology in Health (PATH). The project was reportedly funded by the Bill and Melinda Gates Foundation, an American charity.


The committee stated that:

"Several questions were asked and concerns expressed in the media and well meaning quarters on the role of government agencies including Indian Council of Medical Research (ICMR) and Drugs Controller General of India (DCGI) in approving and facilitating the trials, which was against all laws of the land and even international ethical norms and rules; misuse of government funds, man-power facilities and infrastructure for the private project of dubious nature; use of logo of Natural Rural Health Mission (NRHM), an official programme of the Union Government during these vaccination drives to give it respectability and official endorsement ; and above all the blatant violation by PATH of all regulatory and ethical norms laid down by the Government of India for the purpose as also possible violations of such norms prescribed and very scrupulously enforced in the Country of its origin viz. United States of America."


The committee were extremely scathing of PATH's activities, stating that it was their belief that in trying to get the HPV vaccination included into the universal immunization programmes, PATH had resorted to an element of subterfuge calling the clinical trials by several different names including Observational Studies and Demonstration Projects. The committee stated that in doing so. PATH had severely jeopardised the safety and well being of young girls and adolescents by using self-determined and self-servicing nomenclature which was not only highly deplorable but a serious breach of the law of the land.

Furthermore, the Indian parliament stated that it had been clear from as far back as October-November 2006, that PATH's main objective was to generate evidence supporting the introduction of the HPV vaccine Gardasil being included into the Indian government-funded immunization program.

However, PATH was not the only organization criticized; the report also criticized several others including the Drugs Controller General of India (DCGI), stating:

"The Committee's examination has proved that DCGI has also played a very questionable role in the entire matter. Initially, it took a call that since human subjects, as part of the studies, were receiving invasive intervention like immunization, clinical trials rules must be enforced. However, it remained a silent spectator thereafter, even when its own rules and regulations were being so fragrantly violated. The approvals of clinical trials, marketing approval and import licences by DCGI appear to be irregular. Therefore, the role of the DCGI in this entire matter should also be inquired into."


Not only did the committee find clear cases of conflicts of interest they also found that many of the consent forms for the vaccination had been forged. The forms were supposed to be signed by a parent or guardian if the subject was under the age of consent. However, the report stated:


Of course this could not have come sooner for the three brave activists and campaigners who in January 2013, submitted a Writ Petition to the Supreme Courts of India, criticizing these very same organizations. I say this because their case was heard today, Monday 2nd September, just three days after this damning report was released.

Background to This Case


For those of you who have little or no knowledge of the Writ Petition here is a little background information.

In January 2013, I wrote an article titled, The Writ Petition, documenting the historical moment when activists Kalpana Mehta and Nalini Bhanot, along with Dr. Rukmini Rao, President of the Gramya Resource Centre for Women in India, filed a writ petition with the Supreme Court of India under Article 32 of The Constitution of India for Women. The petition was filed against:


The petition outlined a series of serious allegations regarding the HPV vaccines Gardasil® and Cervarix®. Petitioners Kalpana Mehta, Nalini Bhanot and Dr. Rukmini Rao reported that the two HPV vaccines were illegally brought into the states of Andhra Pradesh and Gujarat and subsequently administered to thousands of young, vulnerable Indian children before the vaccines were known to be safe.

The three Petitioners told the court that even though the Indian government and the above organizations knew the HPV vaccines were of dubious value and of speculative benefits, they continued to allow a trial using both the Gardasil® and Cervarix® vaccines without regard to the potential endangerment of the lives of adolescent girls.

To read the entire two page article, please click on the link provided below:

Green Med Info
Posted by Stranger in a Strange Land at 10:20 AM