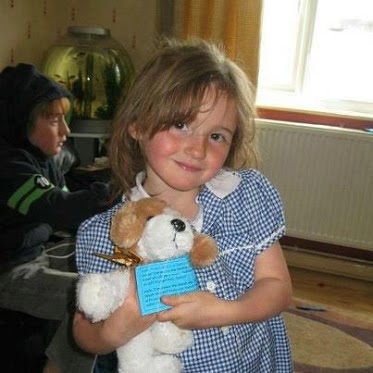 Police in mid Wales have launched a search after a five-year-old girl went missing tonight in Machynlleth. (UK)

April Jones was last seen playing on her bicycle with friends near her home in the town around 7:30pm BST on Monday.

She was seen getting into a light coloured van (Believed to be a small Ford Transit Connect Van) which then drove off.

Dyfed-Powys Police say they are becoming increasingly concerned for her safety and are asking anyone with information about the incident to call them by dialling 101.

April was wearing her school uniform and a purple coat.

Up to 200 people had gathered at Machynlleth Leisure Centre by 23:00 BST preparing to join the search for the missing girl.

BBC Wales reporters in the town said a crowd of people had also gathered on its main street to look for April.

There were also reports of police activity on the estate in the town where she lives.

April's mother is a friend of a friend of mine but here is the BBC News link to confirm it is genuine appeal, it is also on the national news channels.

http://www.facebook.com/FindApril
Posted by Stranger in a Strange Land at 2:17 PM