The Philippines battle another Martial Law

A new law called the Cybercrime Prevention Act has been passed in the Philippines. Although it claims to protect the people from cyber crimes such as cyber bullying, many have found loopholes in the newly signed law that will curtail the freedom of speech of Filipinos. It is to be enacted today, October 3.

With the Cybercrime Prevention Act, where libel is considered a criminal act, a simple comment and retweet may send us to jail, where we can serve up to 12 years in prison. And because this law is a special law, good faith and intent does not come as a defense.

Section 4 also includes Cybersex as a punishable act without clearly defining what constitutes cybersex. Its unclear definition of cybersex raises questions of whether two consenting adults, such as couples who are apart engaging in cybersex, might be considered a criminal offense.

Our right to privacy is also injured in Section 12 where it allows the National Bureau of Investigation (NBI) and the Philippine National Police (PNP) to collect real-time traffic data on individuals suspected of committing cybercrime offenses.

Section 19, known as the “takedown clause” violates procedural process as it only needs a “prima facie” evidence to take down a website. In addition, it also violates the separation of powers between the branches of state as it gives the Department of Justice, not the courts, the power to restrict or block access to computer data.

Other provisions of the law which are problematic are Section 6, which violates the equal protection clause as it imposes penalty one degree higher compared to crimes not done through a computer and Internet and Section 7, which violates the right against double jeopardy as it allows a person to be punished twice for the same offense.

Organizations, individuals, bloggers and netizens has recently formed the Philippine Internet Freedom Alliance (PIFA), a movement that works against the Cybercrime Prevention Act and for the protection of freedom of speech and privacy, among others.

On Tuesday, PIFA gathered for Black Tuesday, a silent protest at the Supreme Court, in time for the en banc session, asking the justices to issue a temporary restraining order (TRO) before the law is to be implemented. Netizens were also encouraged to do an online black-out, which many of them did by changing their Facebook and Twitter profile and cover photos to black and/or by taking down their websites and blogs. To date, seven petitions for a TRO have been passed. However, the Supreme Court said they needed more time to study the law and the deliberations were moved to Tuesday, October 9.

While we all want to be protected from cybercrimes such as cyberbullying, the Cybercrime Prevention Act does not answer the problems we are facing but merely curtails our freedom of expression and sends a chilling effect on Filipinos. And all of this is happening as we commemorate the 40th year since the declaration of Martial Law in our country.

More than 20 years under Martial Rule in our country has already taught Filipinos how important freedom is. Should we remind this new administration under the son of the President we installed through “People Power” in 1986 that he owes his Presidency to the same people who fought for the freedom that he is now trying to curtail? Unless President PNoy listens to the people, he might find himself in the same situation as his mother, but this time around, an Aquino overthrown. To this we say, #NeverAgaintoMartialLaw – cyber or not. 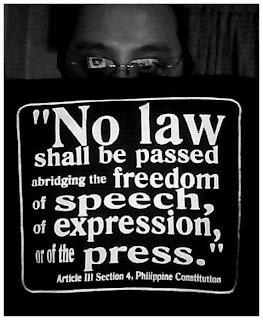 Posted by Stranger in a Strange Land at 10:36 AM