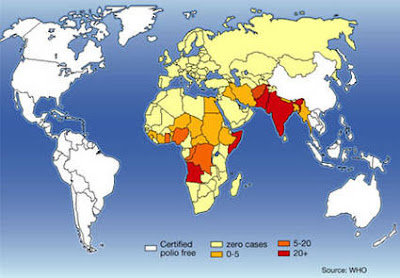 
“There were 47,500 cases of non-polio paralysis reported in 2011, the same year India was declared “polio-free,” according to Dr. Vashisht and Dr. Puliyel. Further, ‘the available data shows that the incidents tracked back to areas were doses of the polio vaccine were frequently administered. The national rate of NPAFP in India is 25-35 times the international average.”  Aaron Dykes

“Not only does the OPV [oral polio vaccine] revert to neurovirulence and paralyse people, but it also looks as if it is really transmissible,” said Roland Sutter, chief of the polio eradication branch at the Centers for Disease Control in 2001. [Image: 2001 World Polio Map]

In Pakistan there is concomitant dramatic increase in paralysis following administration of the polio vaccines.

A government inquiry there confirmed the effects of the polio vaccine, funded under a GAVI program.
Its investigation revealed that the GAVI alliance was recommending untested vaccines, and asked that
all GAVI-recommended vaccines be suspended until testing showed their safety and efficacy.

The WHO, rather than rush to both India and Pakistan to find out what is going wrong with the polio vaccines, is now “suggesting” that Pakistan could face sanctions and a cut off of visas if they do not continue to force the vaccines on children there.

“Why would countries that have invested millions of dollars for the eradication of polio tolerate any possibility of the virus traveling from Pakistan to their country,” the key global official of the WHO rationalised, and elaborated: “Some countries in their individual capacities want to impose travel restrictions that are not in the benefit of Pakistan and must be avoided. It must be clarified that WHO is not a party to any of those plans.”

No one is threatening to cut off visas of Indian citizens, yet they have been exposed to 47,500 cases of “non-polio.”  They are free to travel wherever they wish.  But then, the Indian government is is not publicly questioning (though its public health officials are) and certainly not suspending the GAVI vaccination campaign.

“Bill and Melinda Gates Foundation is a founding member of the GAVI Alliance (Global Alliance for Vaccinations and Immunization) in partnership with the World Bank, WHO and the vaccine industry. The goal of GAVI is to vaccinate every newborn child in the developing world.2

“Now that sounds like noble philanthropic work. The problem is that the vaccine industry has been repeatedly caught dumping dangerous―meaning unsafe because untested or proven harmful―vaccines onto unwitting Third World populations when they cannot get rid of the vaccines in the West.3
Some organizations have suggested that the true aim of the vaccinations is to make people sicker and even more susceptible to disease and premature death.4

The WHO, part of GAVI, is even touting India as an example of polio eradication.  It is saying nothing about India’s 47,500 cases of paralysis following polio vaccination.  Those are  “non-polio.”  Yet “non-polio” is apparently more deadly than wild polio.

While data from India’s National Polio Surveillance Project showed NPAFP rate increased in proportion to the number of polio vaccine doses received, independent studies showed that children identified with NPAFP “were at more than twice the risk of dying than those with wild polio infection.”

The WHO push for the vaccines thus seems unrelated to health or mortality but most related to continuing their vaccination campaign, one in which two major countries are already reporting a dramatic increase in paralysis following the vaccines.  The Who punishes the country that takes a public health approach to the vaccines and suspends them following an inquiry, and praises the country that continues to go forward after 47,500 of its children have been paralyzed already.

While the human costs are the starkest reminder that bad policy in philanthrophy and government alike can damage lives, the economic toll of the vaccination program has also reflected badly on the involvement by the World Health Organization and Gates Foundation, both core partners of GAVI (Global Alliance for Vaccines and Immunization), which also boasts the Rockefeller Foundation, World Bank and United Nations as partners.

Their recommendations to achieve total vaccine saturation of populations in poorer countries are obscene, if only on the basis of cost alone.

The thrust of the GAVI campaign seems disconnected from the harm that is occurring but instead appears focused on achieving “saturation vaccination” at all costs.  Bill Gates in on record as saying that vaccination will lower world population.  A previous push for forced vaccination by his GAVI partners, the WHO and Rockefellers, might stand as a warning..

Bill Gates’ good friend, David Rockefeller and his Rockefeller Foundation were involved as early as 1972 in a major project together with WHO and others to perfect another “new vaccine.”

The results of the WHO-Rockefeller project were put into mass application on human guinea pigs in the early 1990′s. The WHO oversaw massive vaccination campaigns against tetanus in Nicaragua, Mexico and the Philippines. Comite Pro Vida de Mexico, a Roman Catholic lay organization, became suspicious of the motives behind the WHO program and decided to test numerous vials of the vaccine and found them to contain human Chorionic Gonadotrophin, or hCG. That was a curious component for a vaccine designed to protect people against lock-jaw arising from infection with rusty nail wounds or other contact with certain bacteria found in soil. The tetanus disease was indeed, also rather rare. It was also curious because hCG was a natural hormone needed to maintain a pregnancy. However, when combined with a tetanus toxoid carrier, it stimulated formation of antibodies against hCG, rendering a woman incapable of maintaining a pregnancy, a form of concealed abortion. Similar reports of vaccines laced with hCG hormones came from the Philippines and Nicaragua.

In this GAVI push for vaccination, local reports of paralysis are ignored.  On-going Local needs are ignored.  But the financial (and other) interests of the world’s biggest investors in vaccines and the manufacturers themselves are being served.  Dr. Neetu Vashisht and Dr. Jacob Puliyel of the Department of Paediatrics at St Stephens Hospital in Delhi note that:

“…. the polio eradication programme epitomizes nearly everything that is wrong with donor funded ‘disease specific’ vertical projects at the cost of investments in community-oriented primary health care (horizontal programmes) ….”

Aaron Dyke concludes his article warning about the corruption involved in vaccines and how creating panic is a means to sales of vaccines:

This kind of unethical partnership between the WHO and private entities is reminiscent of the corruption we saw in the H1N1 Swine Flu Scare where the World Health Organization declared a pandemic, later admittedly elevated on flimsy pretenses to create demand for the vaccine. This was exposed by Council of Europe Health Committee Chairman Wolfgang Wodarg who demonstrated that drug firms collaborated with WHO officials to deliberately create a “campaign of panic” and a ‘false disaster’ over swine flu pandemic fears not proportionate to the real dangers.

He does not mention a parallel and the most dramatic case of “treating” in history – the millions of deaths during 1918-19 which were not caused by a flu – despite the WHO continuing that fiction – but most likely were caused by mass overuse of aspirin.

The current situation with vaccines applies.  The “solution” to the very few cases of wild polio in India and Pakistan is a mass vaccination campaign put on by the richest vaccine investors in the world.  The result so far is 47,500 cases of paralysis in India, which the campaign labels as “non-polio,” and as with aspirin in 1918, pushes forward to more use of vaccines and more harm and deaths.  As the situation deteriorated in 1918, the government, military, medical authorities and aspirin manufacturers intensified the advertising and use of aspirin – for what is actually causing the disaster, and the fear and profit increased.

Right now international condemnation is heaped on Pakistan for accepting the reports of its local health people that there vaccinated children are developing paralysis (just as do Indian pediatricians, Vashisht and Puliyel) and have called for an investigation and a halt to Gates’ vaccination campaign.  The oral polio vaccine, the vaccine being used in Pakistan and India, has been known for years for years to cause polio.  The reality is hitting Pakistani where its children are being paralyzed.  Pakistan’s polio is blamed on their suspending the vaccines, so the WHO insists the campaign must be at saturation levels.  In India, children are only getting non-polio, the polio eradication campaign is a great success, so everyone must continue to take the vaccines.

Source of this article:


Posted by Stranger in a Strange Land at 8:38 AM