THE SACRED FIRE - The Wisdom Of Peter Deunov 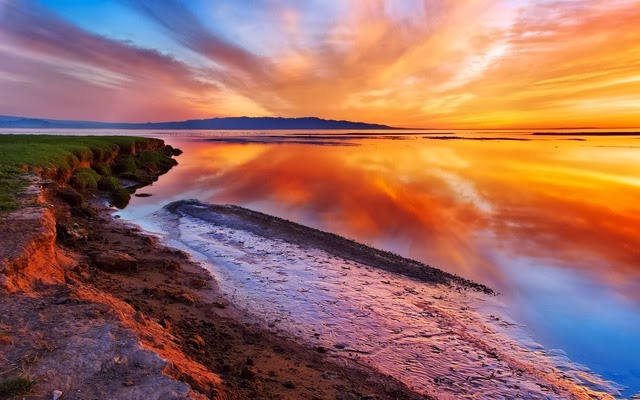 
There is a sacred fire in the world which burns with the flame of eternity.


In this sacred fire the ancient prophets and wise men saw the supreme manifestation of God.


"Our God is a consuming fire" is written in the Scripture.
It is true, this fire consumes - but what does it consume? That which is mortal, physical and sinful.
When that fire acts in the world, some of the people burn up, others are melted, and still others come to life and are resurrected.
All great immortal souls coming forth from God carry this sacred fire within themselves. Wherever they may go in the boundless universe, they work with its help.
And all those souls have one and the same conception of it:
The sacred fire is the fire of Love. Love contains the sacred fire in which life is hidden.
Therefore, where the sacred fire is burning, love is manifested, immortal life is manifested and the fruits of the Spirit grow and ripen.
This fire fills all of space because it is that which sustains life.
It burns within man, too. And while it is burning within him, man is healthy and cheerful. Everything within him is harmonious - metabolism, blood circulation, and breathing. Feelings are right, thinking is right, and deeds are right.
The sacred fire creates a pleasant warmth in man. When that fire burns, man has a feeling of well-being; harmony and peace reign within him.
If this peace disappears from man's soul, it indicates that he has lost the sacred fire and has entered into the ordinary fire. And the ordinary fire burns and scorches - it forms smoke, soot, and ashes.
There is absolutely no smoke in the sacred fire. It creates a pleasant warmth from which life flows.
Therefore, when the sacred fire burns in man, dissatisfaction, doubt and oppression flee from him. If the faintest dissatisfaction and indisposition appear in man, this is a sign that he is outside the sacred fire.
Within the sacred fire, absolutely all thoughts, feelings, and desires are harmonions.
Then man feels what is called heavenly bliss.
And indeed, man can have no peace within himself without the sacred fire. Without it, it is inconceivable for man to have reasonableness. Without it, love, faith, hope, mercy and humility are inconceivable. In short, the manifestation of any virtue is impossible without the sacred fire.
All virtues grow and develop within the sacred fire. Without it, nothing can grow.
Therefore, man cannot live a good life in which virtues manifest themselves, if the sacred fire does not burn within him.
There is no need for man to kindle the sacred fire. He must learn only to keep it burning within himself. By itself this fire never dies out.
It is faith, it is love, it is hope, it is knowledge, it is wisdom, it is truth that cause the sacred fire to continue to burn in man.
The invisible world now acts through this fire. It uses this fire as the most powerful means of purifying man and earth.
The earth is already entering into a new sphere in which matter exists in a virgin state. Here all things will be purified and reorganized. The fire which begins to act on the earth will kindle this matter, and purify and transform it, so that it will be suited to respond to the more intense impulses of the new life.
Everything that endures the mighty currents of the Divine Fire will remain to be used in life, but that which cannot endure the intensity of this fiery wave will be thrown out as unnecessary cinder. In space there are also channels through which the dirt and scrap of life are thrown out.
Of course, no instrument could ever measure the temperature of this fire. It is much higher than the temperature of the sun.
Only this fire is able to purify the hearts and the minds of men and to prepare the earth for the blossoming of a new culture. Only after the earth passes through this fire - and that will last for many ages - will it enter into a new epoch.
That which is true for the earth and humanity as a collective whole, is true also for the individual man. The new life cannot begin for him until the sacred fire is kindled in his soul.
But once the sacred fire flames up within him, he will become magnetically attractive for all, and people will be kind to him.
Think about the sacred fire in which God manifest: Himself.
Think about the sacred fire which all perfected soul: carry within themselves, and keep it burning.

Keep that fire burning, because in this way you sustain your very Life.

Posted by Stranger in a Strange Land at 8:34 AM

Thanks for sharing this one! The first third of this writing didn't really make sense or feel good to me, but the rest did make much sense and felt good.
I have found in my own life that when I feel at peace, calm and grounded within myself - I feel or rather know what is best for me in what to do or what to be... but in the moment doubt, insecurituy or fear comes in - my mind and thoughts switch from what I felt was good for me, to something that I "think" might be right for me but leaves me with a feeling of uncomfortableness, doubt and insceurity.... so I will bring with me what Mr Deunov said about feeling at peace and calm within and from that know that "I'm on right track"! ;)

Because when the feeling inside is one of calmness and knowing... not only do you feel better, but what you want to do (instead of what you fear to do) become so much more fun and joyful

Thanks for sharing
Kindest regards