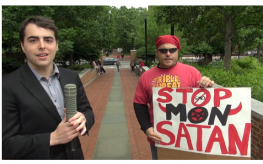 The decision by the mainstream media to ignore the thousands of individuals marching down the busiest streets of major cities worldwide may be appalling, but in reality it matters very little at this point. Not only is the movement against Monsanto adding to its number each day thanks to the real alternative media and intelligent activism, but the movement as a whole is driven by an inexorable desire to push the GMO ‘food bully’ out of our food supply.

And in addition to the rapid success, growth, and determination of the movement, we have key players in the alternative media that have decided they’re fed up with the hindered focus of mainstream news agencies. I am extremely glad that we decided to run live coverage on the March Against Monsanto in Philadelphia for its first year, as otherwise the event would not have been properly documented and shared. Couple that with the fact that the mainstream media is on its last breathe of life, and you realize that the alternative news media can actually succeed without the support of the multi-billion dollar news agencies whose ratings are plunging.

What’s truly amazing is that I saw hundreds of pedestrians not taking part in the march use their smart phones to take a few minutes of video. Video that they will likely post on Facebook, Youtube, or Twitter and incite social media activity. Whether it’s asking what is going on via their hundreds of friends on Facebook, or showing support for the march. This is how ideas and movements spread in the modern age, and this is how things like the March Against Monsanto go viral — no television required.

In fact, it really just comes down to strong ideas and topics. We have so much support from so many different groups coming out and standing up against Monsanto that it just goes to show there is a ‘sleeping giant’ of awake individuals who thoroughly understand the challenges we face as a nation. One only needs to tap into that powerful energy of resistance to ignite a movement, like a match to a gasoline-drenched fire pit.

I was extremely impressed and inspired by the support at March Against Monsanto, including the number of readers who came up to voice their support. At the end of the day, even corrupt Monsanto executives and paid-off politicians cannot stand up against a movement like this.

Note:  There was a total blackout of this event in Sweden also.
Posted by Stranger in a Strange Land at 5:41 PM