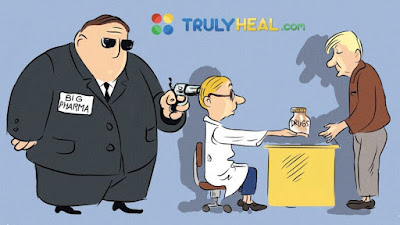 You could say these marketing tactics are merely concerning.  But I think of them as satanic. What the data are telling us is that these drugs are ruining people’s lives,” said  Phillip Prior, MD


Commercially corrupted medicine is the leading cause of death in the US—and it is bankrupting the US budget.  The Washington Post is addressing both issues in a powerful hard hitting investigative series by Peter Whoriskey titled: Can Medical Research be Trusted?
The focus of the series is on Pharma’s – orchestrated corruption in collaboration with academic scientists and prestigious journals—e.g., The New England Journal of Medicine–provided the authority and veneer of legitimacy to fraudulent, often ghostwritten research reports that claimed that lethal drugs were safe and beneficial while concealing the most severe, lethal adverse effects of prescription drugs, which are a leading cause of death.
The series shines a light on industry manipulated data that was used to gain FDA approval and to “negotiate” the content of FDA- approved labels.  And on medical practice guidelines—such as the recently revised, American Psychiatric Association (DSM5) diagnostic and treatment manual—have been crafted by scientists with copious financial ties to companies whose products they promote.
The resounding verdict—much as our own five-part series, America’s Healthcare Crisis — is that medical research, medical journals, medical practice guidelines, FDA advisory panels, and doctors—all of who are bankrolled by the pharmaceutical industry—cannot be trusted!
Unfortunately, the entire evidence base has been perverted,” said Joseph Ross, a professor at Yale Medical School who has studied the issue.
Another insightful, prominent critic who has examined internal company data, Dr. David Healy, describes the evolution of randomized controlled trials (RCTs) that came into favor in the wake of thalidomide as a method to evaluate drugs and their risks.
They were supposed to keep ineffective drugs off the market, but companies have learned that you can do any number of trials and if even some show a marginal benefit they can get their drug on the market and the others can be suppressed so no one has a true picture of the effects of the drug. Once on the market, the favorable RCTs are turned into a turbo-charger to boost sales even for debatably effective drugs. The risks get written out of the script by ghostwriters and creative publication strategies.”
Those “creative publication strategies” provided a reassuring message to physicians: do not hesitate to prescribe patented drugs widely, at high doses, for approved and unapproved conditions.Doctors have readily adopted commercially driven medical practices–they do not.

suffer any harm from the harmful drugs they prescribe or recommend—they are shielded by their professional status.
Thus, harmful drugs of no demonstrable clinical value have been catapulted into billion dollar blockbuster sellers. These are not bloodless crimes: there are hundreds of thousands of human casualties whose lives were sacrificed to increase profits.
You could say these marketing tactics are merely concerning.  But I think of them as satanic. What the data are telling us is that these drugs are ruining people’s lives,” said  Phillip Prior, MD
Indeed, the most recent report in series, focusing on the skyrocketing prescriptions of opiates–from 76 million prescriptions in 1991 to 219 million prescriptions in 2011 (December 30, 2012). Peter Whoriskey notes:
“The label on the drug, which was approved by the FDA, said the risks of addiction were “reported to be small.”  The New England Journal of Medicine, the nation’s premier medical publication, informed readers that studies indicated that such painkillers pose “a minimal risk of addiction.”
Another important journal study, which the manufacturer of OxyContin reprinted 10,000 times, indicated that in a trial of arthritis patients, only a handful showed withdrawal symptoms. Those reassuring claims, which became part of a scientific consensus
But Lisa Roberts, the public health nurse, whose primary job is to reduce the fatalities associated with drug use, said:
Around here, we call it ‘pharmageddon.’ “This has been absolutely devastating to Appalachia. From what we’ve seen, the risks of addiction were tremendous.”
Not only has the profession sold its integrity, its leaders and practitioners have become partners in fraud and deception—doctors have become accessories to manslaughter.Each report in the series provides details about hidden relationships of prominent physicians who participate in criminal marketing of prescription drugs. The perversion of medical science is the root cause that led the FDA to grant marketing approval to deadly drugs and continued for years to turn a blind eye to catastrophic deadly consequences.
At least 22 drugs that had been approved since 1993 were withdrawn after causing hundreds of thousands of preventable deaths. See list at: http://www.ahrp.org/cms/content/view/861/56/
The deadly examples highlighted in The Washington Post investigation include drugs that were withdrawn after they killed hundreds of thousands of people, and drugs that continue to kill:
Painkillers Vioxx (Merck) and OxyContin (Purdue); antidepressants  Wellbutrin (GlaxoSmithKline);  diabetes, Avandia (GlaxoSmithKline); osteoperosis, Fosamax (Merck); heart failure, Natrecor (Scios); anemia drugs, Epogen / Procrit / Aranesp ( Amgen and Johnson & Johnson).


Other issues that the Washington Post should examine is the unprecedented encouragement to prescribe powerful psychotropic drugs widely for children and pregnant women–even as there is data showing increased risk of serious harm.  A long overdue examination is called for about the role–if any–that psychotropic drugs have played in random school shooting rampages.It is extremely frustrating to realize that no matter how compelling the accumulation of evidence demonstrating that medicine has been perverted from a  healing profession that focused on patients’ best interest, into a profession of licensed accomplices in a vast commercially-driven enterprise, doctors continue to abuse their professional status and license for cash with impunity. Doctors pathologize normal behavior, including childhood and grief,  and doctors promote the prescribing of highly addictive drugs, drugs that trigger life-shortening disease, and drugs that precipitate violent , suicidal, murderous outbursts.

Thus, harmful drugs of no demonstrable clinical value have been catapulted into billion dollar blockbuster sellers. These are not bloodless crimes: there are hundreds of thousands of human casualties whose lives were sacrificed to increase profits
Source of the above article:   Can Medical Research be Trusted? – Washington Post

Posted by Stranger in a Strange Land at 1:46 PM