Major New Issues with Vaccines Are Surfacing by Greg Davidson 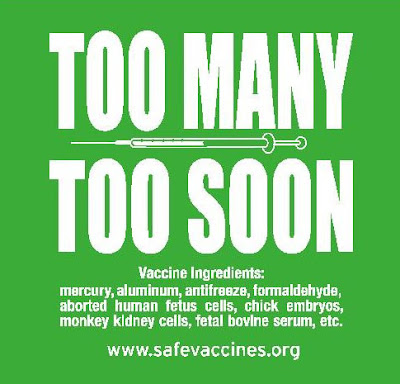 Bill Gates spoke to Sanjay Gupta on CNN in February 2011, saying that skeptics of vaccines are killing children.  But 2011 was to be a year in which Gates’ own polio vaccine program in India paralyzed 47,500 children and those paralyzed died at twice the rate of those infected by wild polio.  Gates’ eradication program has two problems.

First, it is predicated on a scientific falsehood, since it’s been known for ten years that polio cannot be eradicated, not since the biotech industry developed a synthetic polio virus.  In the latest issue of the Indian Journal of Medical Ethics, Neetu Vashisht and Jacob Puliyel at St. Stephens Hospital in Delhi explain:
“The charade about polio eradication and the great savings it will bring has persisted to date. It is a paradox that while the director general of WHO, Margret Chan, and Bill Gates are trying to muster support for polio eradication (22) it has been known to the scientific community, for over 10 years, that eradication of polio is impossible. This is because in 2002 scientists had synthesised a chemical called poliovirus in a test-tube with the empirical formula C332,652H492,388N98,245O131,196P7, 501S2,340. It has been demonstrated that by positioning the atoms in sequence, a particle can emerge with all the properties required for its proliferation and survival in nature (23, 24).” [Emphasis added.]

“Wimmer writes that the test-tube synthesis of poliovirus has wiped out any possibility of eradicating poliovirus in the future. Poliovirus cannot be declared extinct because the sequence of its genome is known and modern biotechnology allows it to be resurrected at any time in vitro. Man can thus never let down his guard against poliovirus. Indeed the 18-year-old global eradication campaign for polioviruses will have to be continued in some format forever. The long promised ‘infinite’ monetary benefits from ceasing to vaccinate against poliovirus will never be achieved (24). The attraction that ‘eradication’ has for policy makers will vanish once this truth is widely known.”

The second is that the synthetic polio virus created in biotech labs is more virulent, and more likely to kill than the natural one.

The biotech industry has created other new synthetic viruses.  Pertussis is another.  There, too, the world is seeing increasing cases of pertussis among the vaccinated, and in fact, the diseases is spreading among them.  Of particular note is the relation to a new strain of bacteria.  Is this also a biotech synthetic virus?

“Dr. Fritz Mooi, a well-known Dutch scientist who has been studying mutations of the pertussis bacteria for 15 years, said a more virulent strain of bacteria is contributing to outbreaks.”
Meanwhile, measles vaccines are showing the same propensity to cause the disease they are supposed to prevent. In Largest measles outbreak in the Americas since 2000: Quebec Ongoing Epidemic, Philippe Belanger, Ministèr of Social Services in Québec, Montréal, stated:
“While this still ongoing outbreak feeds largely on unvaccinated individuals, the high proportion of cases who received two doses raises concerns on vaccine effectiveness. However, the take-home message is still to get vaccinated.”
Gaia Health takes exception with that last sentence: “Belanger overstates the facts. In some areas, as demonstrated by De Serres’ study, more of the vaccinated have come down with measles.”
Dr. Gaston De Serres, an infectious diseases expert with the Quebec’s public health agency, is the lead author of another study, which shows that 52 of 98 measles cases in teens who’d been fully vaccinated, reports Gaia Health.
“Exactly why getting vaccinated is the ‘take-home message’ doesn’t appear to be explained,” says Gaia Health. “As is so often the case in vaccination issues,  the need for vaccines is taken on faith.”
Based on an unpublished WHO study on measles risk among the vaccinated and unvaccinated, Mr. Belanger should not be surprised that those who have been vaccinated for measles would be contracting measles. In fact, it should be expected.
Studies over many years have shown vaccines causing the very diseases they claim to prevent, and even causing more diseases.  But the new issues with vaccines extend beyond even these disturbing facts:
·      Vaccines for measles, pertussis and polio, are, at a minimum, not preventing the diseases they are supposed to have ensured against;
·      In some cases, such as polio, the vaccines are causing diseases that they were supposed to prevent and a more virulent strain;
·      At least with polio, the disease is now ineradicable because the biotech industry has created a synthetic strain (and this may apply to many other disease viruses the biotech/vaccine industry is working on); and
·      The new synthetic strain used in the polio vaccine is more virulent, making vaccination more dangerous than contracting the natural disease.  Is this true of the other vaccines?
Obviously, it is quite serious that vaccines are causing diseases and in the case of polio, introducing more deadly strains. But these are not the limit of the serious new concerns with the vaccines.   Three other issues now claim attention:
To read the entire article, please click on the link provided below:
http://foodfreedomgroup.com/2012/04/26/major-new-issues-with-vaccines-are-surfacing/

Posted by Stranger in a Strange Land at 9:47 AM