The Wisdom of Sri Aurobindo - Part 2 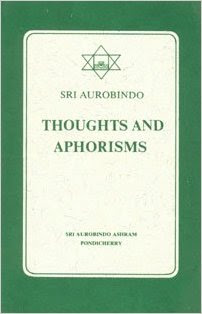 The theme of these wise sayings are about Medical Science and Natural Healing.  Sri Aurobindo's words are very similar to those of Mary Baker Eddy.

1.  For nearly forty years behind the wholly good I was weakly in constitution;  I suffered constantly from the smaller and the greater ailments and mistook this curse for a burden that Nature had laid upon me.  When I renounced the aid of medicine, then they began to depart from me like disappointed parasites.  Then only I understood what a mighty force was the natural health within me and how much mightier yet the Will and Faith exceeding mind which God meant to be divine support of our life in this body.

2.  Disease is needlessly prolonged and ends in death oftener than is inevitable because the mind of the patient supports and dwells upon the disease in the body.

3.  The doctor aims a drug at a disease;  sometimes it hits, sometimes misses.  The misses are left out of account, the hits treasured up, reckoned and systematised into a Science.

4.  Medical Science has been more a curse to Mankind than a blessing.  It has broken the force of epidemics and unveiled a marvelous surgury; but also, it has weakened the natural health of Man and multiplied individual diseases, it has implanted fear and dependence in the mind and body;  it has taught our health to repose not on natural soundness but rickety and distasteful crutch compact from the mineral and vegetable kingdoms.

6.  The north country Indian herdsman attacked by fever sits in a chill stream of a river for an hour or more and rises up free and healthy.  If the educated man did the same, he would perish not because the same remedy in its nature kills one and cures another, but because our bodies have been fatally indoctrinated by the mind into false habits.

7.  It is not the medicine that cures so much as the patients faith in the doctor and the medicine.  Both are a clumsy subsitute for the natural faith in one's own self-power which they have themselves destroyed.

8.  The healthiest ages of mankind were those in which there were fewest material remedies.

9.  The most robust and healthy race left on Earth were the African savages;  but how long can they so remain after the physical consciousness has been contaminated by the mental aberrations of the civilised?

10.  We ought to use the divine health in us to cure and prevent diseases;  but Galen and Hippocrates and their tribe have given us instead an armoury of drugs and a barbarous hocus-pocus as our physical gospel.

11.  Medical Science is well meaning and its practitioners often benevolent and not seldom self-sacrificing: but when did the well-meaning of the ignorant save them from harm doing?

12.  The spirit within us is the only all efficient doctor and submission of the body to it the one true panacea.

13.  If all remedies were really and in themselves efficacious and all medical theories sound, how would that consule us for our lost natural health and vitality?  The upas tree is sound in all its parts, but it is still an apas tree.

14.  God within is infinite and self-fulfilling Will.  Unappalled by the fear of death canst thou leave to Him, not as an experiment with a calm and entire faith they ailments?  Thou shalt find that in the end He exceeds the skills of a million doctors.

15.  Health protected by twenty thousand precautions is the gospel of the doctor;  but it is not God's evangel for the body, nor Natures.

16.  Man was once naturally healthy and could revert to that primal condition if he were suffered;  but Medical Science pursues our body with an innumerable pack of drugs and assails the imagination with ravening hordes of microbes.

17.  I would rather die and have done with it than spend life in defending myself against a phantasmal siege of microbes.  If that is to be barbarious and unenlightened, I embrace gladly my Cimmerian darkness.

18.  Surgeons save and cure by cutting and maiming.  Why not rather seek to discover Natures direct all-powerful rememdies?

19.  It should take long for self-cure to replace medicine because of fear, self-distrust and unnatural physical reliance on drugs which Medical Science has taught to our minds and bodies and made our second nature.

20.  Medicine is necessary for our bodies in disease only because our bodies have learned the art of not getting well without medicines.  Even so, one sees often that the moment Nature chooses for recovery is that in which the life is abandoned as hopeless by the doctors.

21.  Distrust of the curative power within us was our physical fall from Paradise.  Medical Science and a bad heredity are the two angels of God who stand at the gates to forbid our return and re-entry.

22.  Medical Science to the human body is like a great Power which enfeebles a smaller State by its protection or like a benevolent robber who knocks his victim flat and riddles him with wounds in order that he may devote his life to healing and serving the shattered body.

23.  Drugs often cure the body when they do not merely trouble or poison it, but only if their physical attack on the disease is supported by the force of the Spirit,  if that force can be made to work freely, drugs are at once superfluous.
Posted by Stranger in a Strange Land at 12:37 PM

I found this article to be extremely interesting..one that at one time in my life I probably wouldn't be able to relate to,but now I can. A friend of mine and I have discussed this issue a lot in the past..Mike,thanks for sharing.

You are most welcome. Glad you took these wise words to heart.

Would you be so kind as to share the link to this book? You have piqued my interest in it.♡☆♡