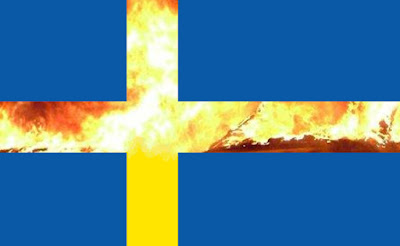 It's soon election time in Sweden so both major parties are doing their best to discredit each other.  An article came out in the Friday edition of the Metro Newspaper alleging that a number of Politicians of several political parties are hiding their court judgements of being found guilty for drunk driving, robbery along with armed robbery, murder, and rape from other party members as well as voters.  This is on the Township, County, and Parliament levels.  The prosecuted wrong doers believe that hiding their past criminal records will increase their chances of keeping their jobs and being re-elected.  They also believe that any revealing of this to the public will lower trust in them and their parties.  The lower level politicians believe that they can fly under the radar of the press since the media is concentrating their investigative efforts on frying the big fish at the Parliament and Minister level.

Saturday there was another article about a Township Level Politician who has worked in high positions in more than one city in his County.  He was convicted for murder of his girlfriend in 1985 and has managed to hide this from his employers until recently.  He doesn't think it's important that the public know and what he did in his past doesn't really matter today.  After all, people do change and one must move on with their life.  Shall we believe him and forgive and forget?

In November, 2006 an Environmental Party member was convicted of armed robbery with a knife in the Stockholm Underground.  In October, 2009 a Church Politician  (Christain Democractic Party) was convicted for rape of his own Grandchild.  Here are some good Christian and family values.  After Metro informed his party he got the boot.  In November, 2009 a Folk Party Township politician was convicted and fined for buying sex in a group sex activity with several prominent citizens in his own home.  He lost his job also.  Another Christian Democrat from the southern region of Skåne was tried and convicted for robbery in the 1990's.  The Police Chief for the whole of Sweden has been tried and convicted for organizing and running group sex activities with young teenager prostitutes for Politicians, Business Men, and other prominent citizens.  When he was arrested he was in his car on his way to meet with a young girl to give her a job interview and was carrying sex toys and B & D equipment in his car.  It was reported he liked his sex rough and liked to beat the girls also.  Perhaps he missed the part of his Police training in which he was taught to "Serve and Protect".

During the trial the names of others involved was withheld from the public record.  I suppose this was to protect the guilty and prevent further scandals.  After seeing this news, I remember commenting to my wife that I bet that there were other Ministers and Parliament Members as well as highly placed Civil Servants involved, thus the cover up.  Is it a coincidence that shortly after the Labor Minister for Sweden resigned his position after allegations of buying sex?  Perhaps if the Top Police Chief and his highly placed political associates were not so distracted by sex with teenage girls, the heavy consumption of alcohol, robbery, and rape than there would most likely not be such dramatic increases in crime in Modern Day Sweden.  Are these men who reportably misuse their positions of power to commit criminal acts themselves going to support tougher laws and tougher penalties for criminal acts?  I would think not.  Has Leadership and Honesty gone the way of the dinosaur?

Those of you in other Lands.  Does my narration on corruption and misuse of power sound a bit close to home?  Sometimes living in Sweden feels a lot like back home for me when I am following the Local and Nation News Reports.  This growing corruption in what I call, self-servers is certainly worldwide and leading to a lessening of all that is good in our Lands.

It is not my intention to throw stones in a glass house by some of my entries depicting life in Modern Day Sweden, but to perhaps do some window washing so that those viewing from both near and far will be better able to see more clearly where they reside.  Sometimes an honest view outward can lead to a more honest viewing inside one's own borders.  The distractions, dis-information, mis-information, myths, lies, and deceptions are so many.  Sometimes by learning to look beyond these shortcomings and hold on tight to the thin yet strong thread of honesty, one is able to help hold together that which is still good in our humanities, communities,  and in our world.
Posted by Stranger in a Strange Land at 12:32 PM

From USA...
Found I don't play 'Crusader Rabbit' any more or what I call the 'us vs them' game.
I find that if one has selective information from their own experience and can safely get that out then one should. I hold that in the end, in any culture, health trumps perversity.
So, yes, agree with your last sentence very much.
Michael in Camden

Thanks for your comment. Always nice to hear from you.

Friedrich Nietsche said that a human being is a dirty river and you have to be an ocean absorbing the dirt and being clean. The same with the politics. Viktor, esq.

Thank you for your comment. Yes, much cleaning needs to occur in the Political Realm and we the citizens are the ocean.