Let The Emergence of a New Humanity Begin! 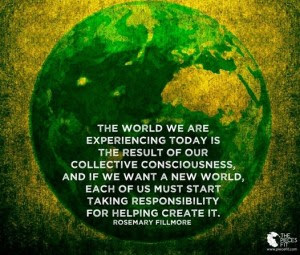 Let The Emergence of a New Humanity Begin!

27th July 2015
By Paul Lenda
Guest Writer for Wake Up World
Reality is a consciousness hologram with the ability for us to move through time, to experience the full range of emotions we feel as humans. This vast (even infinite) quantum reality is filled with metaphors to help us understand and bridge the gap between physical reality and the nonphysical subtle reality of consciousness. The rainbow bridge is the ultimate metaphor in shifting our awareness towards a place where we are consciously evolving and becoming intentional evolutionaries. By crossing this bridge, we are able to become self-realized and self-realization is then just one step away from full enlightenment and liberation.
Even legendary physicists Einstein and Planck have said that matter doesn’t exist. By finally realizing that we are not what we think we are – this solid body that our basic senses perceive is the real ‘us’ – we can experience self-realization on the highest level where we realize that we are multidimensional consciousness simultaneously experiencing a wider horizon of Reality than we had ever previously thought was possible; even if we come from a religious background since this realization transcends all human concepts.
The purpose of life is to gain experience. What else is life but a continuous stream of experiences? Of continuous being and becoming? The only constant in existence is change. There are enormous transitional and transformational shifts and changes occurring right now, the end result of which is still too hazy to see clearly. What we can all do to help ensure that the future is a bright one – one that fully empowers and liberates humans wherever and whoever they may be – is to shift our minds towards unity and away from all the divisiveness that plagues human society.
We are all interconnected… it’s time we start living life reflecting this reality.
The concept of Oneness and being One with everyone and everything is not a new concept at all. It is probably actually the underlying concept of all major belief systems that has survived to this day. This concept is something that has in recent times been dubbed The Golden Rule which expresses that we are to treat others as we would like them to treat us because we are all part of the same Whole and any one thing we do to someone else, we are doing to ourselves. This is where global consciousness becomes a relevant topic, which is the idea that each one of the 7 billion individual brains that have consciousness are in fact, One collective consciousness.
Human beings are a storytelling species. As much as we would like to believe that we are rational, scientific people who consider all the “facts” before acting, the truth is that our stories and the roles we play in them have a far greater impact on our behavior. Your family, past experience, and even your name are all part of the story of who you are (or at least who you tell yourself you are). We play many roles in different stories – husband, wife, co-worker, business partner, sibling, employee, boss, waiter, customer, father, mother, friend – and it is each of these roles that has a far greater impact on our behavior.
We also have another kind of story, a collective story that answers the question of who we are as a people. The current story of the people descends from the Newtonian, mechanistic worldview. It says that we are each separate beings – separate from each other and from Nature -interacting through market transactions to maximize economic and reproductive self-interest. In this story, dolphins suffocated by oil spills, starving children, and ostracized homeless people does not affect us. How can it if we are truly separate from one another?
This belief that we are separate from one another is being challenged both by quantum science and our own intuition. We know in our hearts that the world is supposed to be much more beautiful than what has been offered to us as normal. As the old story of separation falls apart, a new story based on the interconnected web of life is being born.

Posted by Stranger in a Strange Land at 7:07 PM