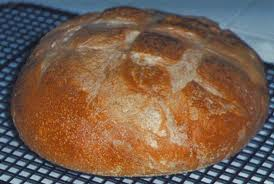 Sick of seeing a dozen or more things on the ingredients list of an industrial loaf?

Well, here are the first step to making a loaf with just three!
see also


A bit about sourdough

True sourdough breads are made using a starter that contains a culture of naturally occurring yeasts and lactobacilli or lactic acid bacteria.  The yeasts produce carbon dioxide (CO2) that makes the bread rise and the bacteria produce lactic and acetic acids that affect characteristics including taste, texture and sourness of the finished bread.  In the right quantity, the acids also act as a preservative, slowing the onset of mould – a much more natural method than the spraying of calcium propionate that many modern factory loaves get.

From a hundred or more species of yeasts, Saccharomyces cerevisiae (brewer’s sugar fungus) is the one usually predominant in sourdough cultures, the same species that’s sold as fresh, dried or instant bakers’ yeast. The main difference is that these industrialised versions are specific strains that have been bred (or even spliced together using GM technology) for characteristics such as speed and/or volume of CO2 production.   These are then grown as monocultures, often on molasses.

Various instructions or recipes for making sourdough starters, leavens or whatever name you choose, call for ingredients such as yoghurt, grape skins or other fruits. Whilst there is a good reason behind some of these (live yoghurt contains lactic acid bacteria and yeasts adhere to grape skins) they are not necessary as colonies of both live on the skins of grains.  The argument that those best suited to feeding off cereals (and producing CO2 and acid as by products) are the ones found living on them is a very persuasive one.

The following is both simple and effective.  Rye grains apparently host very large microbe populations and certainly, testing this recipe has produced a very active starter that’s made a mess of my kitchen worktop more than once.  As the yeasts live on the outside of the grain, your chances improve when using wholemeal flour, preferably from organic farms where they will have used less or no fungicide.
A plastic container with a lid is convenient for storage and if your starter gets frisky, the lid will simply pop off, where a glass jar with a screwtop or metal clip seal could crack or shatter.

Mix together and leave at room temperature (again about 20°C) for 24 hours.

Mix in another 30g of flour and 30g of water and leave for another 24 hours.

As day two.
Once it's bubbling up nicely, you can use some of the starter straight away to bake a loaf of Real Bread, or keep in the fridge until needed.


Caring for your starter

Posted by Stranger in a Strange Land at 11:04 AM