The Wisdom Of Mary Baker Eddy 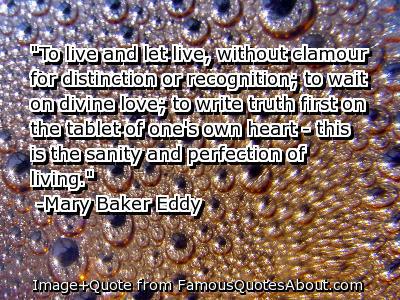 Mary Baker Eddy was an influential American author, teacher, and religious leader, noted for her groundbreaking ideas about spirituality and health, which she named Christian Science. She articulated those ideas in her major work, Science and Health with Key to the Scriptures, first published in 1875. Four years later she founded the Church of Christ, Scientist, in Boston, Massachusetts, which today has branch churches and societies around the world. In 1908 she launched The Christian Science Monitor, a leading international newspaper, the recipient, to date, of seven Pulitzer Prizes.

To read more about this illuminated Teacher & Healer, please click on the link provided below:

Posted by Stranger in a Strange Land at 3:57 PM

She was indeed a big influence in her time and after, and yet it's been years since I've heard her name until this. I had a connection with some of her followers near Glastonbury in England back in the early 1960s.