If You Believe In Vaccines, You Don't Believe In The Perfection of The Human Body by Dave Mihalovic 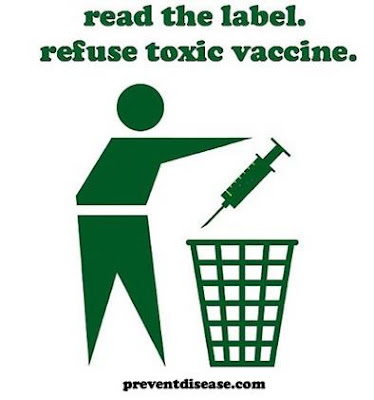 If You Believe In Vaccines, You Don't Believe In The Perfection of The Human Body
by Dave Mihalovic
Prevent Disease,  7  February 2013
Plain and simple, you can't believe in both. The marketing of vaccines relies on fear and intimidation with a constant amplification of a myth that the human body is somehow flawed and incapable of protecting itself against foreign invaders. Humans have lived on the Earth for hundreds of millennia, yet in the span of only one century, mass populations have been duped into believing they can no longer survive on this planet without foreign DNA and man-made chemicals being injected into their bodies. The lies have been repeated so often that they have become the truth for billions of people--and regardless of the resources and logic these people are presented with, they will defend their truth until their time has come to see an alternative perspective. So here's one perspective: If you believe in vaccines, you don't believe in natural health and you certainly don't have any confidence in the human body in all its perfection.
The human body is a gift--an incredible biological machine capable of remarkable diversity in form and function. It's older than any technology that exists in the world today and has survived the ages with a population growth that can only be defined as accelerating, not decelerating. Yet it's constantly underappreciated, undervalued and forever judged on its inability to "perform" at even a satisfactory potential. We're always trying to fix what society feels are its deficiencies and it can never be left to its own devices or healing mechanisms. The human body is damaged from birth so we must fill it with chemicals so that it can survive--this is the philosophy of mainstream medicine.

Allopathic medicine believes that prevention can only be achieved through chemical intervention, using drugs, vaccines, radiation, and literally poison to treat disease. In this sense, it uses a failed model and it's proving to be the scourge of humanity, as evidenced by the amount elderly populations who are living in more pain and disability than at any other point in our history.

Our food industry, pollution levels, toxic consumer products are also largely to blame, but medical treatment models including pharmaceuticals fit very well into the equation that helps create the formula for debilitation.

Dr. Malasky says that humans are living longer but not better in terms of quality of life and health, especially when we compare modern populations to those just 50 to 70 years ago. So although life expectancy is longer, it has come at a cost. "We suffer with more disability and pain which increases at a rate of at least 8-12% per decade after the age of 50," said Malasky.

One of the claims that vaccine manufacturers make is that human life expectancy today is largely due to the advent of vaccines since they claim that the drugs represent one of the most significant medical breakthroughs of the past century that helped rid disease. It's just another myth that continues through repetition and neurolinguistic programming (NLP) in our schools, media and healthcare systems. NLP is one of the easiest and most widespread methods of persuasion, especially for those not conscious to its effect on the mind. Familiar things require less effort to process and that feeling of ease unconsciously signals truth (this is called cognitive fluency).

Vaccines have never saved us. Reports on two centuries of official statistics gives just a small preview of how an entire industry spawned on misinformation campaigns convincing people that crippling diseases such as polio, measles, smallpox, and others were eradicated due to vaccines. They weren't. They were already on the decline as evident from the mortality statistics. Table 29 is especially relevant since it shows that well-vaccinated individuals against small pox doubled the fatality rates of those practically unvaccinated. Improved sanitation, clean water, less overcrowding, better living conditions, and nutrition are what contributed to disease declines, NOT vaccines. This is also borne out in published peer reviewed research.

The basic truth that served as the foundation for the mountain of lies known as vaccinations was the observation that mammals who recover from infection with microorganisms acquire natural immunity from further infections. Whenever T cells (the little packman cells which kill viruses, bacteria, and cancer cells, thus conferring cellular immunity) and B cells (antibody producing cells which confer humoral immunity) are activated by various substances foreign to the body called antigens, some of the T and B cells become memory cells. Thus, the next time the individual meets up with that same antigen, the immune system can be quickly triggered to demolish it. This is the process known as immunity.

This truth gave birth to a belief that if a foreign antigen was injected into an individual, that individual would then become immune to a future infection. This belief was given the name, “vaccinations”. What the promoters of vaccination failed to realize is that the respiratory tract of ALL mammals (since animals are just as devastated by these inoculations with disease as are humans) contain secretory IgA (an antibody which initiates the natural immune response) within the respiratory tract mucosa. Bypassing this mucosal aspect of the immune system by directly injecting organisms into the bloodstream leads to a corruption in the immune system itself. As a result, the pathogenic viruses or bacteria cannot be eliminated by the immune system and remain in the body, where they will further grow and/or mutate as the individual is exposed to ever more antigens and toxins in the environment which continue to assault the immune system.

The mechanism by which the immune system is corrupted can best be realized when you understand that the two poles of the immune system (the cellular and humoral mechanisms) have a reciprocal relationship. Thus, when one is stimulated, the other is inhibited. Since vaccines activate the B cells to secrete antibody, the T cells are subsequently suppressed. This suppression of the cell mediated response is a key factor in the development of cancer and life threatening infections. In fact, the “prevention” of a disease via vaccination is, in reality, an inability to expel organisms due to the suppression of the cell-mediated response. Thus, rather than preventing disease; they actually prevent the disease from ever being resolved typical of the medical model which relies on treating symptoms rather than disease.

The organisms continue circulating through the body, mutating and transforming into other organisms (as demonstrated by the work of Professor Antoine Bechamp), depending on the acidity and toxicity of the internal terrain of the body.

In addition, manufacturers load vaccines with excipients and ingredients that depress the immune system including carcinogenic, immunotoxic, neurotoxic, carcinogenic and sterility agents such as MSG, formaldehyde, polysorbate 80, detergents, thimerosal and many other toxic ingredients.

Dr. James R. Shannon, former director of the National Institute of Health reported in December, 2003 that “the only safe vaccine is one that is never used”.

The body is perfect in its natural state. It can resist foreign invaders with ease if given the internal terrain to heal, meaning proper nutrition, clean water and sunlight. It doesn't really need anything else, besides maybe some love. So love your body naturally, because no vaccine injection into your body is a safe one.
Dave Mihalovic is a Naturopathic Doctor who specializes in vaccine research, cancer prevention and a natural approach to treatment.

Source:
Prevent Disease.com
Posted by Stranger in a Strange Land at 2:51 PM

You are most welcome, indeed. :)