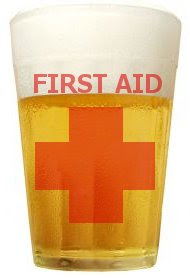 
While it is well known that drinking wine in moderation can be beneficial to your health, beer is often considered an unhealthy adult beverage. However, recent studies show that when taken in moderation, beer may actually benefit one's health in a variety of ways. Though experts have not consented on exactly how much beer is considered healthy, you might want to stick to the government recommended alcoholic drink limit of two drinks per day for men and one drink per day for women.
Different types of beer may offer different levels of benefits and in-depth studies into these effects are still needed. However, microbrews appear to be much healthier than mass-market lagers. Dark beers and beers with hops also appear to contain more nutrients than those of light, un-hopped beers.
Here are 5 health benefits of beer:
Bone Health
Beer appears to be great for bone health and the prevention of osteoporosis. It contains silicon, an essential mineral for bone growth. A typical bottle of lager contains about 22% the recommended daily value of silicon. In addition, the alcohol obtained from beer appears to lessen the degree of naturally occurring bone loss. One study found that beer may be particularly useful for preventing bone loss in postmenopausal women.
Cancer Prevention
The hops found in beer contain a substance called xanthohumol. Xanthohumol has been proven to help fight breast and prostate cancers in lab studies. More specific studies are needed to confirm the connection between consuming hoppy beers and preventing these diseases. On the other hand, some studies have found a connection between beer consumption and an increased risk of stomach cancer. People at higher risk of stomach cancer should consult a doctor before adding beer to their diet.
Heart Health
Drinking beer in moderation may help to lower blood pressure and prevent the development of cardiovascular disease. According to scientists at a beer and nutrition conference hosted in Copenhagen, beer can lower the risk of cardiovascular disease in men over the age of 35 and women over the age of 45. A large Italian study of 200,000 individuals found that moderate beer consumption reduced the risk of cardiovascular disease by 31%.
While this study is a good indicator as to the potential link between beer consumption and good heart health, it does not take into account the many varying factors that may influence the study such as the types of individuals likely to generally drink beer in acceptable moderation, generally people of education and good income. A more controlled study is needed to confirm the potential cardiovascular benefits of beer.
Antioxidants
Beer contains something called prenylated flavonoids that are a great source of antioxidants. Antioxidants have a variety of health benefits because they fight free radical damage to the body's cells. While the amount of antioxidants may vary from beer to beer, dark beer appears to contain the most. More studies are needed to show the specific benefits of the antioxidants found in beer.
Diabetes
According to many scientists, moderate consumption of alcohol may lower the risk of developing diabetes. The same studies show that no consumption or large consumption of alcohol may increase the risk of diabetes.
Other Health Benefits
Other potential health benefits of beer can come from the hops contained in the brew. The health benefits of hops may include lowering the risk of obesity, treating depression and reducing the risk of Alzheimer's disease. However, different types of beer contain different types of hops and in varying amounts. Much more research is needed to prove the health benefits hops may provide in beer. Hops provide the bitter tastes to many beers, so in general, the more bitter the beer, the more hops it contains.
Source:

Posted by Stranger in a Strange Land at 3:01 PM

Doctors recommend drinking a beer a day if you are a woman. If you are a guy, make it two brews every day. Not only can you depend on brew to assist the strength of your heart, beer also assists other parts of your body, like manufacturing proteins and fighting off coronary disease.