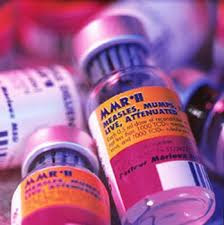 The New England Journal of Medicine has recently released conclusions to the media of a manufactured mumps outbreak of 2009 which occurred in New York City, two upstate New York counties, and one New Jersey County.


There were a total of 3,502 cases of salivary-gland swelling and other symptoms clinically compatible with mumps of which 1,648 were confirmed with clinical specimens.

The results covered in the video report below indicate that 97% of the cases tested involved students who have been previously vaccinated against the mumps; and even more overwhelming is that 89% had received two doses of the MMR vaccination which is claimed to provided immunity from the mumps.

In fact these vaccines do just the opposite; they are used to spread viruses and bacteria throughout the communities through a process the industry as coined ‘herd immunity’. The way in which this ‘herd immunity’ works is that after receiving a vaccination you become a carrier sloughing off the virus-based components and infecting anyone with a compromised immunity within sneezing distance.

Today we live in the most experimental and controlled society in human history, which is leading to an abundant supply of unhealthy individuals who consume poisoned products and medication on a daily basis under the guise of health and safety.

The Center for Disease Creation and Proliferation has stated that in the United States 1 in 6 children are diagnosed developmentally disabled. With new medications and new vaccines being introduced every year through the use of government grants and funds, why is it that we have more sick kids and more diseases than ever?

For an exemtion form due to medical or religious reasons, please click on the link below:

Posted by Stranger in a Strange Land at 8:23 AM