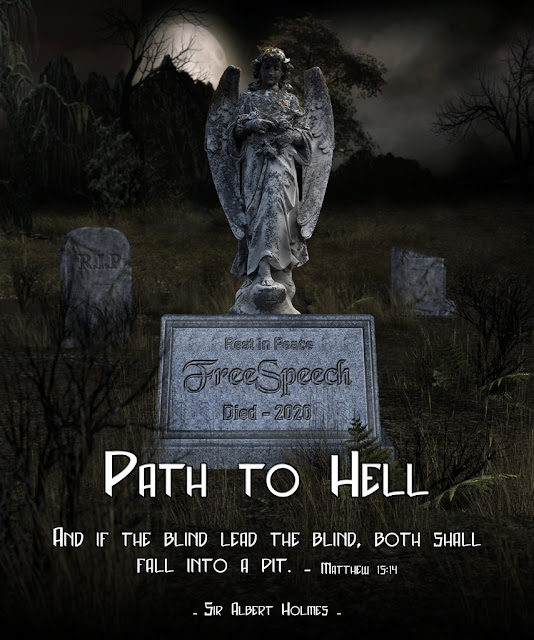 You don't have to be a Prophet to see that the loss of free speech has a strong possibility of occurring in the very near future. It can be stopped. Choices to be made.

To see more of the good Sir's work, Please click on the link provided below:

Sir Albert Holmes
Posted by Stranger in a Strange Land at 9:42 AM

Look at the similarities of the rise of Nazism and the present regime, except that the present regime has gone a lot further. What government and media house hasn't been bought out or controlled by this regime? Look at what the Nazis did to take control. As of the Nazis, the collective consciousness is sitting back letting it happen. How many religious/spiritual leaders are getting together to stop this occurring all over again?

Today, most of my viewers of my blogs are European. Can they see the obvious occurring all over again? I am just wondering when this is going to get to the stage of book burning, I am fairdinkum, meaning, genuine in my concern.

You have honestly and truthfully depicted something very dark and ominous Mike, which sadly is way too honest and truthful for so many today.

Mat, EU is a puppet government of the elites. I call it the Evil Union. The main players are being manipulated just as Hitler and the German population was. Now it it under the banner of Social Democracy and the Humanitarian party line that the UN hypocrisy is marketing. I will say no more.

On the current track, the train will be derailed and the passengers will come to their demise. Unfortunately, Oceania and North America are moving toward this dark destination also.

So too will this pass in time. The circle goes around.

I utterly agree Mike, it is the way of the wind, however, we can choose which way this wind blows of course. When I tell people that the EU is totally corrupt, they look at me in shock and disbelief. This gets back to what is desired to what is of honesty. In all honesty, they really don't want to know.

I am utterly bewildered, it is as if my own consciousness doesn't really belong or isn't a part of this kind of consciousness. My mother must have mated with aliens(-: